COLD TONE HARVEST - AFTER YOU 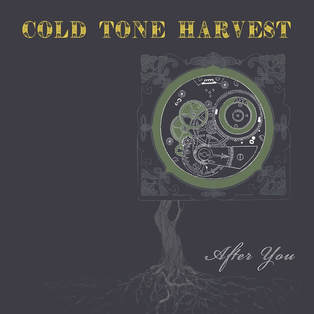 'After you' is the debut album from Southeast Michigan based quartet Cold Tone Harvest and as such is as good a debut as I've heard for a very long time. If there is a problem with it, it has to be that I can't stop playing the damn thing! These nuanced songs and arrangements seem to reveal extra depths with each play and there have certainly been a hell of a lot of plays in recent times!
Were it not for their expansive, sometimes almost 'gothic' country sound it would be tempting to describe the band, or at least their style, as 'classic alt. country,' but with seemingly each new release under the variety of 'country' off shoots it is becoming apparent that these single labels are becoming more and more superfluous. People in this digital age have such easy access to more and more music than could have even been dreamed about even twenty years ago, as a consequence of which influences are expanded exponentially. On first listen it is often still possible to affix a label to an album but with subsequent listens more and more generic influences often become apparent, as is the case with 'Cold Tone harvest,' despite the overriding influence seeming to be in and around alt. country. Much of the reason for this is down to Andrew Sigworth's raw, yet melodic and tuneful lead vocals that are able to evoke a variety of emotions and draw every drop of drama out of these excellent songs.
Talking of Andrew Sigworth, the band consists of Andrew on lead vocals, guitar and trumpet; Anthony Pace plays lap steel guitar, dobro and backing vocals, Ozzie Andrews, upright bass, electric bass and tuba with Brian Williams on drums, banjo and percussion. There were several 'guest' musicians who helped out variously on trombone, cello, guitars, backing vocals, keyboards, mandolin and violin although despite the listed instruments most of the arrangements are if not exactly sparse, certainly never too full, always allowing the instruments to be separated and the vocals dominant.
Of the twelve songs, ten were beautifully written by Andrew Sigworth, the beautiful ballad, Adeline by Anthony Pace and an absolutely tremendous version of Neil Young's Out on the weekend. The second track on the album, Out on the water gets underway with a gentle acoustic guitar intro quickly joined by steel guitar, mandolin, bass and percussion with an excellent lead and harmony vocal. There is a lovely steel guitar and a fiddle break underpinned by the throbbing bass as the mandolin gradually comes more to the fore on a truly excellent song. Change gets off to a gentle start with guitar, bass and mandolin supporting Andrew Sigworth's evocative lead vocal, with his 'melodic rasp' deepening the atmosphere on this slow moody song. There is a lovely restrained dobro and as the song builds the harmony vocals come with the percussion gradually changing the tempo as things speed up to mid paced with an excellent dobro break and the metronomic percussion, before slowing again on this hugely atmospheric song. There is an easy going start to Anthony Pace's Adeline with chiming twangy guitar, mandolin, bass and percussion and the lead vocal at its melodic best on a sparky mid tempo love song. The harmonies are excellent as usual and the song rolls along nicely and includes an excellent guitar break. There is a percussion and bass intro on Stealing roots before the melodic twangy guitar joins in on a shuffling speedy mid tempo song that seems to include several different time signatures. It is another excellent tale that adds yet more diversity to this genuinely outstanding, if difficult to pigeon hole, 'roots' album that includes strong country leanings but also an occasional powerful swampy bluesiness! Final mention is of Neil Young's Out on the weekend with its thudding bass and chiming guitar as an introduction then the evocative lead vocal comes in with restrained steel guitar adding further depth and texture on a beautiful heart rending ballad. It is further lifted by the tremendous harmonies that heighten the emotional depths on a song that has a nice acoustic guitar break and latterly a beautiful melodic twangy electric guitar.
This is an album of songs that has a dramatic impact on the senses, with its sound that is warm and washes over the listener, despite its often intense depths. Nothing gets much above a sedate mid tempo but because of the vocals, the excellent playing and some tremendous arrangements there always seems to be variety in the tempos, with the emotional roller coaster rides and the diversity of textures and colours ensuring that 'After you' is an album that will take a long time to tire of, if it ever happens! Add to that the memorable melodies, some of which are genuine 'ear worms' and what more can any music fan wish for? Nothing that I can think of, apart from Cold Tone Harvests next recording!