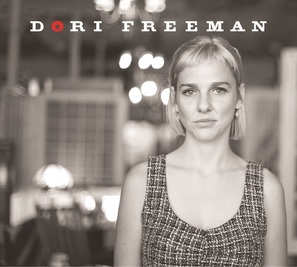 Dori Freeman will, I suspect, be installed in the 'country music' racks of record stores all over the world, which is a shame in some ways because although she has certainly been influenced by what is known as 'classic country music,' Dori also has influences from a much wider spectrum than this rather limiting term.
In these ten beautifully written and performed songs it is easy to detect influences from just about every sub genre that is associated with the rich tapestry that is 'rural roots music' from 'old timey' to 'hard country,' even sometimes including a bluesy element as befits someone with her rural Appalachian roots. Both her father and grandfather are musicians so growing up with a musical background ensured she was always likely to have a feel for 'roots music' and so it proves on this excellent recording.
Her music and style is all about simplicity, something that is incredibly difficult to achieve, unless of course it is heartfelt and natural which this gorgeous and varied debut album most definitely is. The arrangements range from sparse to fully orchestrated and various points in between but without ever losing that edgy rural feel. Dori has fairly obviously ignored any of the oft used modern day polish that seems so necessary to many, adding hugely to her credibility, certainly to my ears! That is not to say there is anything rough or raw in her music, just a lack of any artifice that in many ways links her to her rural roots rather than her music being subverted by any over the top Nashville production techniques.
Her vocal sound is pure and beautifully feminine and yet there is often a barely discernible 'edge' that allows a 'high lonesome' Appalachian feel to creep in, thus ensuring she is a million miles from the twee wallpaper music that so often passes for 'country music.' Her tone is both gentle and steely, perfectly suited to show vulnerability as well as a dogged determination that whatever the circumstances are suggested by a songs lyrics her vulnerability will not get in the way of her determination to rise above whatever can befall her.
The album was produced by Teddy Thompson (son of Richard and Linda), whilst Jon Graboff (The Cardinals) is on guitar and steel guitar, Jeff Hill on bass, Erik Deutsch (Norah Jones, Roseanne Cash) on piano, Rob Walbourne, drums and Alex Hargreaves (Sarah Jarosz, David Grisman) plays violin. Teddy is a much sought after producer and agreed to work on  this album after hearing Dori on the internet, whilst the named musicians are all at the top of their game, an indication of the esteem in which Dori is held.
The album gets under way with You Say an acoustic guitar and bass led slow reflective song with a beautiful, natural vocal from Dori and a clarity of sound that is quite haunting. Whilst it is a song about a lost love it has an atmosphere and sentiment that has a real and edgy feel. Go On Lovin' is propelled by a gorgeous steel guitar, percussion and bass on a beautiful country lost love ballad with Dori's lovely aching vocal having a strong rural feel that somehow makes the sentiments in the song even more believable with a powerful character laden element that has not been subjected to sanitization! Ain't Nobody is a song that lyrically as well as in terms of arrangement has the dynamic attack of a prison work song. The only accompaniment for her vocal is the finger clicks that set the tempo on a song that is lyrically powerful and shows the beauty of her vocals and strength of character in a perfect musical setting that evokes an old bluesy gospel song. Finally, Still A Child is a haunting song that would in all probability perfectly suit Emmylou Harris although even she wouldn't be able to improve on this gorgeous rendering.
I've seen Dori compared to Loretta Lynn and certainly this album is as strong as that great lady's early work but their styles are both of a highly individual and original nature and the differences in their music and lyrics puts them some distance apart. Still, the great similarities are the beauty of their vocals and their individuality and their determination to do things their own way so all in all the comparison has some relevance. Ultimately, whilst her influences may be detectable, Dori Freeman is a highly individual artist who, on the strength of this gorgeous debut album, has the talent that should very soon bracket her with some of the big selling 'country' artists and thanks to that individual style, to then leave them in her wake! Fans of 'real country music' have for a long time cried out for an artist who wears their roots on their sleeve to cross over and shake up the country charts. Perhaps Dori Freeman is that artist!