DANIEL ROMANO – COME CRY WITH ME 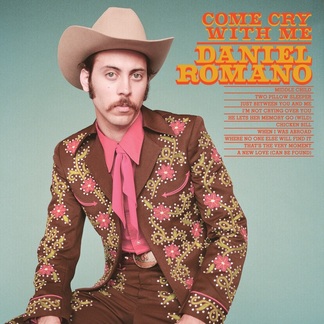 
On first sight of the album cover that has Romano in 1950s country pose, with Nudie style suit and cowboy hat anyone could be forgiven for thinking this was just going to be a parody of the ‘country and western’ music that was so popular around the middle decades of the twentieth century. The fact that it isn’t, instead being an album of superb quality country music that parades it’s influences, from Hank to Gram and Emmylou, is a tribute to the nerve of Daniel Romano, with the album front cover going even more retro with it’s parading of the track list!
Whilst an album such as this can never be declared as wholly original, nonetheless there is an individuality and in a way, even a little originality.  The individuality is simply because very few, if any, others (that I’m aware of), with the exception of Petunia and the Vipers, is playing this type of music anymore, making it fascinating that a young Ontario native, still in his 20s, chose this path. I can understand anyone having a love for the music, but there are few geographical links and it is a hell of a stretch to see it as a career move when most of the music that is closest to this is (over)produced and sanitized in places such as Nashville. For those reasons alone he deserves immense credit for producing an album of this quality, and the fact that it is stylistically virtually unique in this 21stcentury ensures a degree of originality.
Every song on this ten track album was written by Daniel Romano and all are strong, sometimes quite powerful, tales that in the main contain much of the darkness that used to be found in country music. His writing style is highly descriptive, leading to some quite rivetting stories, some which have the listener wondering how things are going to end, if in fact they do end. Miniature, if epic, examples of some of lifes dramas, with no happy endings, as a consequence of which they do on occasions sail quite close to parodying this style of music, but  without ever falling into the trap. He manages to avoid this by the obvious strength of the writing and playing, the
commitment and an at times slightly sinister atmosphere that is belied by the beauty of the music.
Daniel’s excellent vocals contain a powerful yearning that ranges from deep and dark to high and lonesome, with some gorgeous back up harmonies courtesy of quality artists such as Julie Doiron, Misha Bower, Dallas Good and Tamara Lindeman. There is some beautiful pedal steel guitar playing courtesy of Aaron Goldstein and the atmospheric fiddle of Natalie Walker giving the album a lovely full sound but without any of the over the top orchestration so beloved of the commercial ‘country music’ world.
Middle Child is an incredibly sad tale of a middle child, now a whiskey soaked man, put up for adoption by a
mother he can barely remember with Daniels heart wrenchingly atmospheric vocals accompanied by gorgeous steel guitar and fiddle. Just Between You and Me, is a gorgeous song that strongly evokes Gram and Emmylou with lovely choral harmonies, tuneful twangy guitar and steel on a duet with Julie Doiron, whose vocal style differs from Emmylou’s, but is of no lesser quality, on a tale of the guilty feelings of a man and woman who run off together, leaving her husband and child behind. I’m Not Crying Over You, as with most songs on the album, is twang and steel guitar laden, with a dark mournful vocal on a sad song that has some of the Gram Parsons style, about missing a lover that spurned him and his finding a quite original way to cover the tears! He Lets Her Memory Go (Wild) is an almost cinematically dark sad story of a man left alone to bring up his children. The angelic chorus and weeping steel guitar help create a heartbreaking atmosphere with a tremendous lead vocal from Daniel. When I Was Abroad brings a little cynical humour to the tale of a man who finds his wings severely clipped when he eventually settles down. It is a really good chirpy song despite the fact that in the end he decides to leave!
This is a tremendous album that could certainly have benefited from a little more lightness (although in truth many will think that Chicken Bill and When I was abroad achieve this) amongst all the dark but the album
title does, in a literal sense, warn the listener what to expect. Whilst it certainly has it’s roots in Hank Williams and a little of George Jones this recording seems to lean more towards Gram Parsons but without the R ‘n’ B blend, even at times reminding me of the Handsome Family. In many ways more paradox than parody!