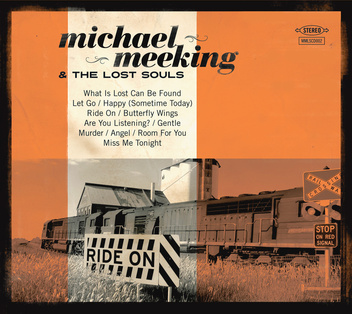 
This excellent release coincides with Michael Meeking and the Lost Souls current tour of the U.K and if the album is anything to go by, you really should check if they are playing anywhere near you and ensure you get tickets! This is only their second album release, the first being 2008s ‘Where to from here,’ which I have yet to hear, but if it’s anywhere near as good as this recording it will be well worth investigating. Michael and his band are Australians and I’ve seen them compared favourably to the very best that country has to offer but with the all round quality possessed by this band that comparison is much too limiting. They would not be disgraced by comparisons to top American bands.
The band consists of Michael Meeking on lead vocals, guitars, banjo, mandolin and all song writing, Julien Chick, bass guitar and backing vocals, Chris gates on electric guitar and backing vocals, Dave Kleynjans on drums, percussion and backing vocals. There are several guests who include Chris Altmann on pedal steel and Kylie Auldist who joins Meeking on a superb soul duet. They work in a generic field that is not so easy to define, a little like an edgier version of the Eagles but with more than a nod to Bruce Springsteen and when you add the fact that the on occasions Meeking sounds a little like Don Henley no harm is done in the vocal stakes! Those excellent vocals are able to express a whole range of emotions and really are the cement that binds these very good and varied songs and tremendous playing together. They do have their own individual style and with the generic variations there is always something of interest going on lyrically as well as musically with a tremendous variety of tempos and emotions. Whilst I’ve already said that there is some generic ambiguity  the more I listen to the album the more country rock elements become evident. Not just because of the steel guitar and twangy electric guitars but through a feeling that seems to permeate the whole album, even those songs that I would term roots rock and whilst nothing is actually groundbreaking there is an obvious individuality to the recording.
The album starts with What Is Lost Can Be Found, a song that at first gives the impression of being a
rootsy rocker but as the steel guitar gently edges it’s way in, the atmosphere changes to a much more expansive and very good country rocker with excellent harmonies on a tale that lets you know this is no run of the mill band! Let Go has a lovely twangy guitar sound on a terrific and epic country rock ballad on which Meeking’s raw emotion
drenched vocals have a similar vocal timbre to Don Henleys. Butterfly Wings is another excellent ballad, this one with a strong haunting element with excellent jangling guitars and atmospheric backing vocals that give the song a ‘spaghetti western’ feel. Murder could easily be an outtake from Bruce Springsteens 2006 album ‘We shall overcome: The Seeger sessions’ with a vocal at least the equal of the boss! A terrific rootsy folksy country tale that, had‘the boss’ written it, would probably have been included on that album! Finally,Gentle is a quite spectacularly soulful duet with Kylie Auldist on which their incredibly intense vocals really add fire to an excellent song and
album.
Certainly Michael Meeking’s vocals have plenty of similarities to Don Henley but the songs are better than most of what Henley has come up with in his solo career to date. The best songs on the album are those that can be termed ‘country rock’ rather than those of the ‘roots rock’ variety although stylistically nothing is really set in stone. The band have a talent and tightness to them that should help to lift their profile and with Meeking’s vocals and songwriting, success should be a given for this collection of eleven very, very good songs that I will probably be returning to for a long time to come. So should you!