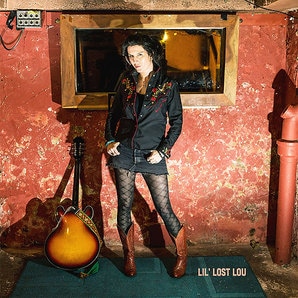 This is an exceptional debut album by a young lady born and raised in Camden Town. Lil' Lost Lou (Lou Psyche) could be easily forgiven for copying or blending styles of some of the greats but the fact is that she is hugely talented and has a genuine feel for and highly original take on the rootsy styles that I've seen described variously as skiffle, punk, country, a combination that fits this album like a glove. Of course, within that description there are various other unspoken styles, most within the broad expanse of country music and its various sub genres.  There is a powerful sense of individuality and strong links with 'rockabilly' and even old 1950s rock 'n' roll, neither of which are over done or stuck too rigidly to, meaning the album has a strong original atmosphere and at times a front porch or even gospel feel in one case. It's that sort of album that will easily and naturally fit into the country racks, but with a strong slice of experimentation with other styles, often linking seemingly disparate elements to the country genre with one song having a 'cacophonous' feel that veers into 'rock' but still with a recognisable link to country.
All eleven beautifully written, arranged and performed songs were penned by Lou Psyche and include some memorable melodies on an album that had the final touches added in the U.K whilst the bulk was recorded in Nashville. A Variety of talented musicians helped out in the studio, such as Dave Roe, Russ Pahl, Stuart Mathis and Justin Amaral, whilst production was courtesy of songwriter, musician and in demand producer Billy Livesy. The songs are all multi faceted, texturally varied and include a variety of tempos, all within the broad country boundaries. There is a raw, yet feminine, unshackled element to the makeup of the album that lets the listener know this lady is not toeing any corporate line but following her own musical muse; an attitude that is both refreshing and deserving of huge credit, ensuring Lou is pretty much unique.
The album opener Boy from the city has a melodic banjo intro with whoops from Lou and percussion and guitars getting things going at break neck pace with her expressive, feminine vocals supported by male counters on an entertaining song that sets the scene beautifully for the variety that is to follow. There is plenty of speedy twangy guitar on a song that is incredibly full of life. Percussion, twangy guitar and weeping steel introduce I kissed your man (Jolene), a much slower song with Lou's gorgeous restrained vocal on an excellent and passionate 'two timing' ballad! The harmonica solo adds to the intensity of the emotions as does Lou's evocative vocal. Keyboards and banjo blend together well plus echoing slide guitar giving Ramblin' woman a swampy feel emphasised by Lou's evocative vocal,  with beautiful steel guitar eventually adding to the mix on a memorable song. On Ride A Train Lou's vocal is slow and virtually unacompanied, with some tremendous gospel harmonies on an excellent song that adds yet more variety to an already varied album. Latterly the hanclaps and occasional harmonica add texture, as do the eventual train sounds! There is a strange haunting banjo lead on He put a hook in me (Bones, feathers, black book, rabbit foot) with Lou's vocal and harmonies equally haunting, soon joined by percussion, throbbing bass and keyboards on a song that is stylistically difficult to pigeon hole but with a chorus that is a real ear worm.
It will be interesting to see where future recordings take Lou and whether she settles on a hard and fast style, although perhaps the blend of elements on this recording is her style! If that is the case and her next c.d is of this quality that will suit me fine, as I suspect it will the record buying public if she can be heard by enough people. Getting people to listen in enough numbers is always a problem but if they do, in the case of Lil' Lost Lou they will get their reward, as hopefully, will she!