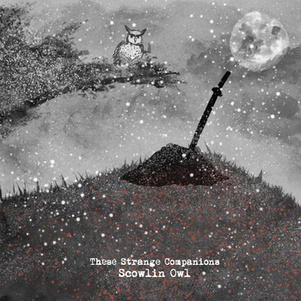 Scowlin Owl – These strange companions (mini album/e.p)
Intensely dramatic album from four talented women who between them possess gorgeous lead and harmony vocals and some incredibly original songwriting and arranging skills. Despite the beauty of the vocals and music the recording has a hugely appealing, slightly sinister otherworldly  edginess. A lovely old timey folk feel with a dash of that ‘eerie old America.’
http://www.scowlinowl.com/


The Kestor Stringband – The Moorgrass album
Tremendous album of nine band originals that, stylistically, are a seamless blend of old time English folk music and old time American ‘country music.’ The musical skills of this talented four piece from Devon ensures a seamless blend that makes these tales as relevant now as they would have been at any time in the last century or more! Proof if needed that there is plenty of life in these old genres as well as the opportunity to come up with something original.
http://kestorstringband.org.uk/
(Full review to follow)

The Stray Birds – Echo sessions (e.p)
Incredibly talented trio who cover five classic ‘country’ songs on this excellent e.p. So good they almost make the songs their own! (review of their tremendous full length 2012 album at http://www.americanrootsuk.com/the-stray-birds.html )

Jacob Miller & the Bridge City Crooners
Terrific album that blends vaudeville, New Orleans jazziness, blues and a variety of other textures into a fully formed and entertaining album that always has a simple upbeat feel. Despite a variety of subject matter and atmospheres it still manages with a sparse but excellent interumentation.
http://jacobmillermusic.net/
(Full review to follow)

Angela Perley & the Howlin’ Moons – Hey kid
A very good album that switches between a powerful rock sound to country rock and back again without ever losing it’s flow or edginess. Angela’s vocals are always strong and forceful as is the backing band  and whilst many will say it is not hugely original, this recording certainly freshens up ‘roots music.’
http://www.angelaperley.com/

Holy Moly – Brothers Keepers
Terrific album of ‘country music’ that is almost impossible to compare to anyone else. Excellent lead vocals, tremendous playing and songs of a consistently high quality. Often referred to as ‘cowpunks’ but they are so much more than that.
http://www.holymolytexas.com/#
(Full review may follow)