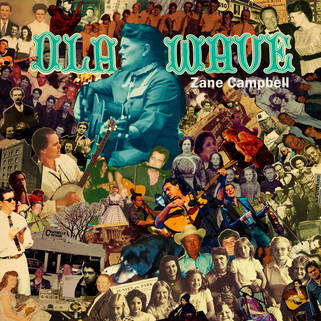 To write anything about the music of Zane Campbell it is first necessary to give a little background and context to his family history that in many ways parallels those of the Carter and Stoneman families. His great uncle, Guy Brooks was fiddler and songwriter with 1920s 'hillbilly' band, the Red Fox Chasers. We talk about 'punk rock' as if it is something relatively new that only happened from the mid 1970s onwards but the Red Fox Chasers had that attitude back in the 1920s with their irreverent take on traditional and 'new'music and their attitude to using anything that fitted with their songs, Brooks even being kicked out of his Baptist Church for "rank blasphemy!" That stubborn attitude continued with Zane's aunt, the great Ola Belle Reed who, as this tremendous recording points out in the opening highly descriptive spoken word track, refused the opportunity to work with country legend Roy Acuff because she ' wasn't taking orders from no man!'
Zane himself continues the family's individuality, following his own path as a respected artist and songwriter as well as a singer, despite having only made two albums. 'Ola Wave' is only really a mini album, clocking in at just twenty minutes and containing only eight tracks, two of which are short 'spoken word' pieces. And yet, this 'album' is quite revelatory in terms of the thread that passes from the early days of recording to the modern day in the 'traditional music' world. It shows that it is possible to stay true to the 'old music' whilst updating it in terms of lyrics and melodies to suit modern tastes without ever losing that strong link to the past. Perhaps it is that raw, uncluttered edge that most traditional music contains that solidifies the path and it is musicians such as Zane Campbell who provide that essential link and modernity, making the music an acceptable part of modern country music, albeit with a total lack of gloss or contrivances that are so beloved of "mainstream country."
Of the eight songs, six were written or taken from quotes by Ola Belle Reed and the other two, Ola wave and A way around it were penned by Zane Campbell. The performances are all excellent, with Zane on vocals and guitar, Russ Carson, banjo, Patrick McAvinue on fiddle and Walker Teret plays upright bass. He is even helped out by his brother, Hugh, with some of the background vocals. It was only a few months ago that I stumbled across Zane's incredible self titled 2015 released debut album, much too late to write a review, but I have played tracks on my radio show and continue to play the album at home and will no doubt do so into the distant future! 'Ola Wave,' on the strength of the first few listening sessions is certain to be treated similarly. Zane's voice has a raw hard edge that is perfectly suited to this now decades old music style that includes nothing extraneous and absolutely no sanitization.
Following the opening spoken word piece about Ola Belle we are treated to a banjo intro on Ola wave, soon joined by fiddle on a Zane original, with his vocal hard and driving with a raw edge and some excellent backing vocals on a song that has a 'pure' yet modern country feel. On Tear down the fences there is a nice fiddle and guitar intro with Zane's powerful vocal having a hardness but no lack of passion or manipulative ability. It is an Ola Belle song that has a strong gospel feel on which the harmonies are, as usual, excellent. A lovely atmospheric banjo is initially the lone support for Zane's strong vocal performance on Springtime of life, eventually joined by the throbbing bass and fiddle, filling out the sound. Zane's haunting vocal performance gives the song an epic, virtually cinematic, 'hillbilly' feel that stretches the listeners imagination to feeling this could be a strong evocation of rural Appalachian communities.
Despite the brevity of the recording, if you buy and listen to this album you will be witnessing a brand of country music that is all too rare in this 21st century. It blends an 'old timey' rural, homemade atmosphere with a slice of modernity that is so naturally and perfectly blended that the listener can't help but think this recording and just a few others like it virtually define 'real country' music. We're fortunate in this modern age to still have musicians around like Zane Campbell who have successfully picked up the gauntlet thrown down by those now long gone originators of the recorded styles who have not only kept traditional music fresh but have managed to develop and update it to suit the time they live in, whilst still staying 'true' to the tradition.