THE LUCKY STRIKES -
THE MOTION AND THE MOVING ON 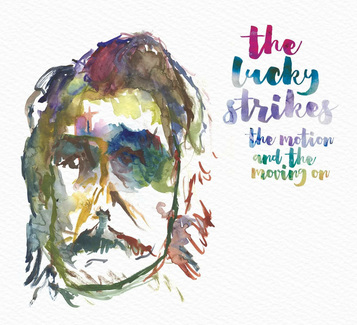 This highly unusual album took me at least half a dozen listens to acquire some comprehension of what was going on; not because I disliked it; I loved it from the off, but because of the scope, the textures and the all round diversity. I still don't know what genre the album slots into, unimportant I know, but the elements that are detectable in varying degrees are many of the off shoots of country, a little grunginess, maybe a little deep, almost hidden folk; actually to be honest I'm not sure exactly what else but suffice to say all of the diverse elements are beautifully blended to form a stew that is uniquely the Lucky Stripes.
This is the bands fifth full length album, plus there have been several excellent solo recording from Matthew Boulter, who on this recording plays banjo, pedal steel, guitars and vocals. The other four members of this talented band of Southend-on-Sea natives are Will Bray on drums, David Giles, organ, piano and vocals, Paul Ambrose on bass and Toby Shaer plays fiddle, saxophone and flute whilst all eleven of the songs are band originals and the album was recorded and produced by Chris Clarke at his Reservoir studios in North London.
If you dare slot this band into a single generic field they will most certainly make you look stupid sooner or later, probably sooner, thanks to their ability to play in myriad styles, albeit styles that are blended and arrived at naturally rather than just trying to be clever or confuse the listener. Perhaps one song will lean heavily towards 'country,' but then the next could well have more of an indie rock feel, one track even reminding me, at least in atmosphere, of Fairport Convention! Perhaps the listener will recognize a solid style in one song and then a blend of two or more styles in the next all dependant on where the band sees Matthew Boulter and Dave Giles's songs taking them, rather than trying to keep within a narrow paradigm. And yet despite all that, everything flows together and it is Boulters vocal style and the great diversity in their songs that actually seems to give them a recognizable 'signature' sound, albeit one that is uncontrived and arrived at naturally through their varied and disparate influences.
In part due to the disparate styles Lucky Strikes music is music that challenges the listener but with the patience that applies to all challenges the rewards are great. Whilst I've said the styles are disparate that may well be a little exaggerated. It is really the influences linked to  the bands own imagination that has taken those various styles and constructed something unique that has myriad tastes and textures that go to make a whole that melds together so well.
The albums opening song, Homesick gets underway with crunching guitars and powerful percussion as a prelim to Matthew Boulters vocals arriving with some excellent band harmonies on a strong song that sometimes gets a little lost in the wash of sound but then in comes a steel guitar to break things up as the song settles down. There is a deep twangy guitar intro on To be an actor, with piano and heavy percussion and chugging electric guitar soon joined by the lead vocal on a song that has a nice diverse sound but one that is never over done. There are plenty of 'country' guitar sounds as well as a heavy propulsive yet fairly dense sound. On Lilac and soil Boulter has just an acoustic guitar for company on a slow moody song and a vocal reminiscent of a youthful Neil Young at his most reflective. Eventually the steel guitar joins in as does the piano, bass and gentle percussion before the climax is reached by a gentle haunting electric guitar. Fiddle and percussive handclaps alongside an atmospheric lead vocal and harmonies give Carry me lord the feel of an old 'hillbilly' gospel song that includes the beautiful dobro  and with the verses sometimes a cappella on an excellent song that definitely fits into the 'country' slot, albeit 'old timey' or 'hillbilly!'
Ultimately a group of musicians with this much imagination was never going to toe the 'mainstream' line and become just another indie roots band; instead they chose to follow their muse wherever it takes them and huge credit should go to them for their vision. For the sake of all 'roots music' fans let's hope they continue on their highly individual path.