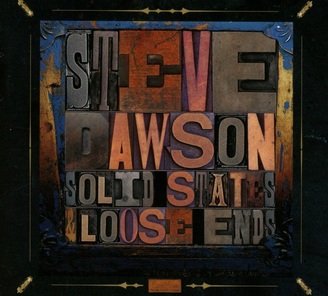 For the better part of twenty years Steve Dawson has been recording and producing albums for many other artists whilst still finding time to record and release a number of recordings of his own. His own releases, by my reckoning this is his ninth, have been musically varied, often widening the boundaries of 'roots music' and yet frequently having a strong country leaning.
Many of the artists he has produced in that time, much of it spent in his home territory of Vancouver, British Columbia, are personal favourites of mine and include such diverse musicians as Old Man Luedecke, recent favourite Matt Patershuk, Christa Couture, Jim Byrnes, Deep Dark Woods and Kelly Joe Phelps amongst many, many others! He moved to Nashville in 2013 where he set up and runs his 'Henhouse Studios,' having won numerous 'Juno' and 'producer of the year' awards whilst in Canada.
Being a multi instrumentalist, sought after producer and a very good vocalist, as well as a talented songwriter, means there is little in music this man can't master as evidenced by this excellent new fourteen song album. Whilst this song collection has a nice flow there is what could often be an almost overwhelming diversity of styles, and yet this recording actually benefits from that very diversity that would destroy many other recordings, because those varied styles are mere generic suggestions rather than being overtly country or blues or soul or any one of the myriad other styles that have influenced this talented man. Certainly all of those elements are there but you could never affix any one of them as a label for the album, as a consequence of which Steve Dawson has in many ways defined his own style which happens to be a mish mash of his many generic influences. All of those influences have obviously been absorbed ensuring his roots are certainly peculiar only to him, giving him that individuality that all artists seek, but few find.
The instrumentation is also varied from song to song, adding yet more diversity to the recording, giving the recording as a whole an incredibly 'coulourful' base. Often with that much variety in the makeup of an album the vocals and flow of a recording can get a little lost but everything on this excellent disc is perfectly balanced as are the basic compositions that are thematically varied but all beautifully conceived and written.
Things get underway with Loose Ends an excellent song that strongly evokes a blend of Little Feat and a powerful soulfulness, with twangy slide guitar and soulful choir backing and a horn section allied to keyboards adding yet more colour. A mish mash of stylistic leanings it may be but it is one that works incredibly well. California Saviour opens with a lovely dobro lead on a song on which Steve's vocal is supported by female harmonies before being joined by keyboards and percussion and the eventual inclusion of a gorgeous steel guitar that gives the song a strong country feel. There is some tremendous slide guitar playing on Riley's Henhouse Door, another song that has an easy going feel, albeit one that is lifted by the tremendous guitar sound on a really entertaining tale that is completely lacking in any other instrumentation. Early Warning is a slow soulful, gently funky song that includes gospel harmonies on a composition that has at least part of its roots in the blues. There is some nice guitar playing and those harmonies blend well with Steve's lead vocal with the song further enhanced by a sparingly used Hammond and an excellent guitar solo.
Finally, You Got What It Takes the blend of excellent twangy guitar and horns gives the song a soulful funky start before Steve's vocal comes in and changes the timbre, as usual making the song style impossible to define. It's certainly not soul, funk, blues, rock, r 'n' b or country but could almost be said to be all of them!
You will find few albums containing this much variety and diverse colouring that work but this generically impossible to define album actually defines the myriad stylistic mix that can be found under the broad 'roots' umbrella, and then some. We should probably expect no less from a man of such immense talents! Buy it and give yourself a rare musical treat! Go on, you know you want to.