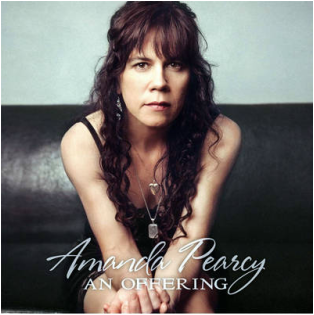 In many ways this review of Amanda's new album enhances the sentiments expressed in my review of Amanda's previous album, 2013s superb 'Royal Street.' This gifted and highly individual singer songwriter has if anything made a small leap forward in quality from that esteemed predecessor. She has been compared to artists such as Lucinda Williams and Mary Gauthier amongst others, not exactly bad performers to be compared to and I can see how those comparisons came about but after very few listening sessions I think it becomes obvious that whilst there are similarities in some ways, Amanda is very much her own stylist having absorbed and digested myriad influences. She has a similar, slightly laconic drawl to Lucinda and the ability to drop her voice to an almost talk vocal in a similar way to Mary whilst still retaining an almost intense melodicism but stylistically there are huge differences. Her 'Texas country music' seemed obvious on that previous album but this one seems to draw in more influences, even a little jazziness, consequently making it more difficult to pigeon hole, but what it does is sets her apart from the pack and makes her, certainly to my ears, instantly recognizable as a hugely talented complete individualist.
Every song on this album has a deep swampy atmosphere, with her reading of Bobbie Gentry's Ode To Billie Joe being quite astounding in the fluctuations and colour of her vocals, which when added to the instrumentation and arrangement puts Amanda's version at least on a par with the original. The remaining twelve songs on this tremendous album are all Amanda originals and whilst rooted in country music are certainly not slaves to the tradition, with the difficulties that have beset her over the last eighteen months or so ensuring that these hugely descriptive and often poetic stories that have been taken from life are often quite mesmerizing. She is supported on this album by some extraordinarily gifted musicians who add to the quality, with Tim Lorsch again beautifully producing the recording, but really it is Amanda's stories and hugely expressive and malleable vocals that dominate this album
The album gets under way with Ribbons And Bows, with deep, slow chiming guitars on the intro before Amanda's lovely edgy feminine vocal comes in. In many ways this song defines Amanda's music. Not for her the over produced cloying sweetness of many people who work in a similar genre. Her songs, like her vocals, are full of lyrical quality and tremendous arrangements and playing that many aspire to, but unfortunately very few achieve. She never keeps to the middle of the road route, instead extending herself in whichever direction the muse takes her, ensuring that her style is full of originality and diversity and the only thing predictable about her music is that one great song and vocal performance will follow another. On Every Now And Then keyboards and melodic guitar allied to percussion and bass drive this powerful, generically indefinable, song with Amanda's atmospheric 'drawl' bringing an unusual bluesy jazziness feel exacerbated by the quite spectacular guitar playing. From the very first note of the lovely deep bass and the harmonica blast it is obvious Ode To Billy Joe is going to be something quite special and so it proves on this hugely unusual rendering of the Bobby Gentry classic. It was a shock on first listen but Amanda's unique vocal treatment draws the listener into one of the most atmospheric tales in roots music. In some ways her vocal has a jazzy feel but it is probably more a question of her approach to country music that whilst most of the time is within the boundaries she is quite happy to cross them, never toeing the prissy over produced line! A powerful acoustic guitar and percussion with a little steel guitar creates a reflective atmosphere alongside the violin on Birds On A Wire a lyrically powerful song that has a lovely powerful and yet hugely melodic flow. Finally, Teach Me To Be is a slow and moody composition that in other hands would be mellow 'late night listening' music but such is the tremendous arrangement and Amanda's manipulation of the lyrics that the power of the song would make late night conversation impossible!
As already mentioned above, but with reference to just one of the songs, 'manipulative' is probably an accurate description of Amanda's vocal style throughout this album. She is quite capable of 'sweetness' but instead chooses to keep things real with her lovely vocal style manipulating the lyrics and depth of feeling in every one of these beautifully written tales. It is that complete individuality of style that above everything else sets her apart in a broad and loose generic field in which many singer songwriters blend together with nothing making one recognizably different from the next. Amanda has broken that mould and this extraordinary album will hopefully give her the major success that she deserves and the music world needs!