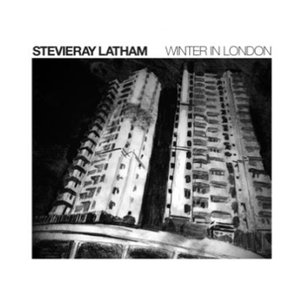 I first saw Stevie Ray perform at a small but perfectly formed festival in Hove a few years ago and was knocked out by the power and dynamism of his songs, vocals and acoustic guitar playing. It was fairly obvious he was something special and so it has proved with this tremendous recording that follows on from the excellent 2015 debut 'Modern Attitudes.' This new recording is more expansive than his debut with a broader instrumentation set up, something that is probably down to increased confidence and rather than being the near disaster that often follows a debut this is actually an improvement!
Fairly obviously, with a title like 'Winter in London' any claim by me that this is an 'American Roots' album could be said to be rather tenuous. Or is it? I don't think it is. This is not going to be one of my sometimes lengthy diatribes about where American roots music comes from, but with Stevie's strong English folk sensibility there are also, perhaps to a lesser degree plenty of country elements. Ample justification to place it under an 'American Roots' umbrella as far as I'm concerned!
The album was recorded at Peter Bruntnells home studio with Stevie's touring band helping out. The sound is crisp and clear, something that is essential to an album on which the lyrics play such an important part, and the playing is sympathetic to the songs requirements rather than displaying any over the top histrionics; just quality and invention.
Stevie is an excellent lyricist, with even his love songs bringing a slight change of perspective to a subject that thousands of songwriters use. Somehow there is an often powerful realism and intimacy to Stevie's lyrics and he is excellent at coming up with memorable melodies; add those to the warmth of his vocals and beautifully arranged instrumentation and it's difficult, all things being equal, to see failure as an option. Of course in this twenty first century the dreaded word 'promotion' has taken on added importance and is probably the most expensive element in the recording artists process, but sooner or later surely talent must win out. Why not in Stevie's case; the talent is there for all to hear. Having mentioned the warmth of his vocals I should also add that he is blessed with an unusual sound and tone that is enough to hold any listeners attention regardless of how sparse the instrumentation is. Not only a talented man but also distinctive, in fact I would think that after hearing him once most people would recognize him in the future. That alone should give him a good chance of success.
The lovely mellow melodic guitar sound gets things underway on Kristina, soon joined by Stevie's distinctive, manipulative vocal, with little or no other adornment but such is the strength of the lyrics, the vocal and guitar that nothing else is required on this gorgeous love song. Never go back has another lovely guitar sound with a nice restrained percussion on a sad moody folksy lost love song that could easily cross over as a 'country song.' The steel guitar adds to the warmth of the recording, keeping things mellow and reflectively sad on this beautiful composition. We reach a fairly strong mid tempo on Late night conversations, with the solid metronomic percussion and Stevie's chiming, melodic guitar perfectly supplementing his both dynamic and relaxed vocal that has such an unusual air,  setting him apart from just about all of the 'singer songwriters' I've heard over the last 50 plus years. It may be a very crowded field with so many different aspects to singer songwriters but Stevie, thanks to the combination of his writing, vocals and guitar playing just seems slightly different. I suppose the reason is that there is usually one of those named disciplines that shows a little weakness, or is perhaps not quite as strong, but in Stevie's case they are all of equal strength. There is a gentle acoustic guitar opening on Winter in London, the excellent title track, that is soon joined by Stevie's evocative vocal on a reflective song that is easily imagined being played on an Appalachian front porch or a London pub, such is its stylistic ambivalence, although the gentle tone would quieten the drinkers! Eventually cello and keyboards come into the mix adding even more dramatic depth to a haunting song.
I've already said that Stevie has a great chance of success given the right circumstances but it is so pleasing to hear a confident and unique British voice coming up with some true originality in 'Roots music' irrespective of whether it leans towards America or the U.K. Stevie Ray Latham is definitely an artist to keep an eye and an ear peeled for!