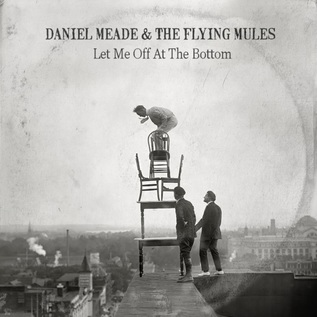 Whenever I listen to Daniel Meade i'm always reminded of the late great Hank Williams! Were that printed in an international music magazine it would be a controversial statement, but it's not necessarily his vocals, although there are a few similarities and it's not the songwriting or instrumentation, although again a few similarities, it is more the spirit of the music and the atmosphere that is created. Hank was pre rock 'n' roll and that is a time that comes to mind on Daniel Meades albums, particularly this tremendous new release. Hank was as much a rock 'n' roller as most of those who arrived throughout the 1950s, although like early Elvis, he was referred to as a country musician mainly because early rock 'n' roll was just a cult fad that was never going to catch on and 'rockabilly was still a few years away! That whole 50s era and the complicated generic strains are, to me at least, a time and style that I feel apply to Daniel and his band; country but with plenty of rock 'n' roll spirit and as a bonus, a 21st century take on the music,
No two artists in any genre are the same. Different styles come about through an individual or group of individuals using their influences to develop their own style. Where did country music end and rock 'n' roll begin? It didn't. It was just a question of ideas developing something that was a little different and others taking up the baton and unconsciousiously or otherwise putting their stamp on the 'new music.' So Daniel Meade has had five or six more decades of recorded music to absorb and distill, as a consequence of which he has come naturally and comfortably to his own unique style that is an amalgamation of all of his influences with the two most recognisable features being country and rock 'n'roll.
The band is made up of the incredibly dextrous and atmospheric playing of Lloyd Reid on guitars, Mark Ferrie on double bass and Thomas Sutherland on drums with Daniel on lead vocals, piano and guitar. In many ways they are a match made in heavan and having seen them twice at the Kilkenny Festival and soon to see them again at the Maverick Festival I can vouch for the fact that they are as tight a band as anyone could wish for, in fact I made them (along with Lands End; another story!) the highlight of the festival. There can have been few bands that could boast of a better musical foundation than that laid by Ferrie and Sutherland. It is something that is absolutely vital if you have a guitarist of the calibre of Reid who despite his skills is still exploring how far he can go and I suspect there is no limit. Then you have Daniel, whose vocals are as perfectly suited to the loose generic field they inhabit as anyones have ever been and whilst I know little about piano playing I suspect that many who have some expertise and have seen him play would say he is gifted in that area as well. It will be fascinating to see just how far they can go in this format. I suspect that the sky is the limit if indeed there is one.
Daniels vocal style is similar to the high nasal style of Hank's but with a natural warmth and the ability to inhabit a number of other styles and tempos within and around country music. All of the songs were written by Daniel and it's not difficult to imagine most being picked up by some of Nashvilles finest, thanks to his gift for both words and melody, with every song having a memorable theme and melody.
There is a lovely melodic start to the album with Back to hell, a song that takes off as the piano comes in followed by Daniels evocative vocal on a mid tempo tale that bemoans the ultimate effect of too much alcohol. The song includes two tremendous and beautifully melodic guitar interludes with excellent bass, pecussion and piano giving a solid foundation and plenty of colour. There's a headstone where her heart used to be is driven by a speedy piano with excellent percussion and bass at a slightly slower tempo than the previous track, with an excellent vocal from Daniel and tremendous harmonies that give the song a 'Bakersfield' sound. The lovely rolling piano and melodic guitar further enhance a great honky tonk song. The title track Let me off at the bottom is another song that is reminiscent of Bakersfield, specifically Buck Owens, even a similar songwriting style, but very much a 21st century ballad that is pretty much unique to what is becoming recognisable as Daniels style. There is a gorgeous steel guitar on Poison dart, a classic country ballad that is reminiscent of so many but actually sounds like none of them. The piano roots a song that has a floaty almost hauntingly ethereal quality in its makeup. Finally, Leave me to bleed Ft. Siobahn Wilson is a beautiful and quite harrowing country ballad that starts with just voice and gentle guitar before being joined by percussion and deep thudding bass, with gorgeous female harmonies on an intensely sad song.
This is another tremendous album from Daniel that will be competing for 'Album of the year' status and is not only hugely entertaining but covers a variety of styles and tempos that go back to the country and pre rock 'n' roll days of the late 1940s and early 1950s. Many other artists play in a vaguely similar generic field to Daniel Meade and the Flying Mules but they have set the bar so high most will get nowhere near the heights they have reached.