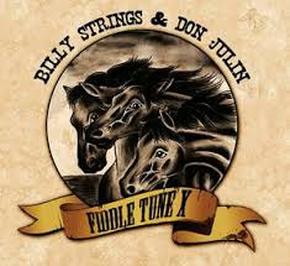 There is an ever lengthening list of albums that are generally defined as bluegrass but are actually more like the old timey music of a couple of decades before bluegrass was invented. This tremendous second release by Billy Strings and Don Julin is such a recording. It has a rawness, fire and lack of any polish, allied to these two hugely talented men’s pleasure in working together on music they have a huge depth of feeling, as well as talent for.

Whilst the ‘bluegrass’ tag will probably continue to be used it is definitely not wholly accurate or at least doesn’t paint a completely true picture. Bluegrass may well account for some of their roots, but their ‘tap root’ and the way they play harks back to the early days of recording in the 1920s and 30s with its folksy old time feel, which I know is the tap root of bluegrass, but I just get the impression of older times when listening to this extraordinary album

Billy Strings is a 22 year old vocalist and guitar player, whilst Don Julin is older, having been around the music scene and been known as a virtuosic mandolin player for some considerable time. Billy’s lead vocals are incredibly clear, confident and soulful as well as catching the feel of a song perfectly and Don’s occasional harmonies add a little more texture to their extraordinary instrumental chops.

Whilst their music is unadorned they are not trying to copy the original or show how virtuosic their skills are. It is more a question of just playing what they feel, giving the album a tremendously authentic atmosphere thanks as well to their depth of knowledge and feel for the music that in all probability few others can match. The album was recorded live at a variety of locations including a snowed-in cabin, a bar, a packed house concert in New York, a church, an Elks Club, and the last song was recorded at Third Man Records in Nashville. Obviously it is not a concert recording as such but it most certainly is an exercise in the skills and variety they bring to live playing. It is not just their virtuosic playing that grabs the attention, it is the thought that these tunes and songs will never be played this way again. Such is the talent of this pair that they have drawn large crowds because no two gigs are alike. They are true to the tradition but only in as much that these are not faithful copies but their own sometimes idiosyncratic interpretations; still recognizable but also unique. Some of the songs are attacked with such fire and virtuosity that at times they just beggar belief. Not being a musician it is difficult to really compare but I suspect that many great musicians would bow their heads to the

Of the generous seventeen tracks six are instrumentals of which their version of I Am A Pilgrin is a highlight among highlights, with guitar and mandolin taking turns on lead and including (probably!) a little improvisation. On the remainder Billy takes lead vocals with Don on occasional harmonies, adding a little more colour to this excellent recording. The album gets under way with an incredibly dexterous live version of the traditional Beaumont Rag which goes some way to enlightening the listener on what is to follow. Open Up Them Pearly Gates is a much recorded traditional gospel song that includes an excellent vocal from Billy and their usual incredible playing. Dos Banjos is a quite eerie song with Billy’s atmospheric vocal supported by the banjo and a foot stomping percussion, with this song in turn followed by an incredible version of I Ain’t Gonna Work Tomorrow. This is a pacy hoedown song with Don’s mandolin speed defying belief and if that is not enough he is soon  followed by Billy doing the same thing on his guitar! Even more of an atmosphere is created  with Don adding some harmony vocals to Billy’s evocative lead on another song that is part old timey and part bluegrass in equal measures! Some of the audience excitement spills over on this live track encouraging the pair on to even greater feats of musicianship. In the case of Shady Grove we are treated to an incredible live version of the classic song on which the audience really get in to the music and with Billy’s atmospheric vocal at it’s best. The duo actually seem to be showing a little restraint but then they segue into an instrumental version and it really takes off!

Not too many people could get away with an album that mixes songs recorded at various locations, all in a live setting, but such are the virtuosic skills of this pair that the album is a highly pleasurable listen without giving a thought to continuity. Few of the original writers and performers could have matched the skills in play on this album and whilst many of the songs are recognizable these are all very much Billy and Don’s interpretations with much of what they play being improvised. If you love atmospheric music played with mind boggling skill you will probably not find this albums equal anywhere! Great album.