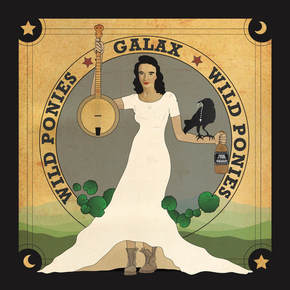 The Wild Ponies debut album was released under their own names of 'Doug and Telisha Williams,' with this incredible album being their third as The Wild Ponies, a recording that I suspect can genuinely be considered to be the very definition of 'a labour of love!' Some of the songs on this tremendous recording sound as if the band has jumped from the 1920s to the 21st century missing out what came between but using modern technology to help provide  a modern take on their 'old timey' music. In actual fact describing it as 'old timey' is a little deceiving; the music certainly has many of the elements found in the old 'hillbilly' music that  dates back nearly a hundred years, but many of the songs are more expansive and related to modern day country music. There has been no sanitization and the essential edginess of 'real country music' is maintained ensuring the roots are showing, or at least easily traceable, leaving an album that has a purity of sound you would expect in the modern day but musically true to those deep old roots. None of this should be surprising, both Doug and Telisha hail from Galax, Virginia, the virtual bedrock of what used to be known as 'hillbilly' music. Add to that the fact that, with some musical friends, the couple went back to Doug's grandparent's farm near Galax where they recorded this album, even using some local musicians who Doug had known most of his life
Of the ten songs on the album there are two that were written solely by Doug and Telisha, plus four others on which they worked with artists such as Ben Glover, Amelia Curran, Amelia White and Perry Frye. In the case of the remaining four, one is traditional            , one by Hazel Dickens, one by Jon Boyd and one by Perry Frye and Alice Leon. As I said above, everything, including the songs that have a little more modernity than others, has an easily traced path back to the traditional country music of many decades ago as opposed to the 1940s, 50s and even 60s version that is often referred to as 'traditional.'
It's probably a good idea to list the musicians here, those who evacuated Nashville in search of their muse and those from the Galax area. Fairly obviously there was Telisha Williams, who played bass and vocals and Doug Williams on vocals and guitar, with Fats Kaplin on pedal steel, fiddle and banjo, Will Kimbrough played guitar and mandolin, Audrey Spillman supplied harmony vocals and Neilson Hubbard, who along with Doug produced the album also played drums. From Galax there was Kyle Dean Smith on banjo, 'Snake' Smith, guitar and Kilby Spencer was on fiddle. To the mix has to be added the fact that Telisha's gorgeous and hugely evocative vocal style is reminiscent, at least to me, of a cross between old favourite Nanci Griffith and current favourite Amber Cross, ultimately the icing on an already delicious cake! The performances throughout couldn't be bettered, similarly the excellence of the arrangements but Telisha's vocals are the element that I just can't get enough of! Having said that, Doug is no slouch when it comes to supplying lead vocals, something he does with distinction on two of the songs.
In fact, Doug takes lead vocal on Will they still know me, the song the couple wrote with 'Orphan Brigade's Ben Glover, with harmonies, banjo, bass and a shuffling percussion for company. Eventually an electric guitar comes in on a tremendous song that is actually reminiscent of the Orphan Brigade and would have slotted beautifully into the Brigades debut, the stunning 'Soundtrack to a Ghost Story. Galax actually gets underway with the traditional Sally Ann, driven by fiddle, banjo and bass on an old 'classic,' with everyone contributing vocals on this beautifully played and hugely evocative performance that virtually defines musicians enjoying playing together in a relaxed setting. It is followed by Tower and the wheel, written by Doug and Telisha, with the latter's gorgeous vocal to the fore, supported by fiddle, banjo, guitar and bass, with the mandolin meandering its way through a song that evokes a high lonesome 'holler' of old. There is another lovely vocal from Telisha on Hazel Dickens' Pretty bird with just an acoustic guitar for company on this quite stunning composition that has never had a more evocative treatment. As the song progresses a high lonesome fiddle adds to the depth of the atmosphere. On Mamma bird the fiddle and bass allied to banjo get the song up and running with Telisha's vocal joined by guitar on a song that is easily imagined being played at a 'hoedown' thanks to the weaving in and out of the lead instruments.
'Galax' is not an album on which the musicians have just copied or tried to recreate the musical styles of many decades ago; they actually have a deep and completely natural feel for, and understanding of, the music, playing in styles that blend their influences that will have started during their Appalachian childhood. It is an overused term but this music is as natural to the Wild Ponies as breathing, as will be the pleasure felt by anyone who hears this tremendous recording. It will probably come as no surprise to anyone if I say that for me this is among the best albums of this decade so far!