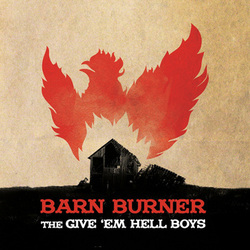 
This Edmonton, Alberta based Canadian band are certainly no respecters of generic boundaries, blending punk, country, folk, blues, and more into an appealing mess of raw roots music that despite the overlapping styles holds together incredibly well thanks to the talent within the band and their impressive drive and commitment. There is a hugely appealing ramshackleness that often threatens to take the breath away thanks to the sheer force of energy that goes into every song, all of them played with fire, attack and no little skill.
The album ranges from incredibly rawboned hard driving punked up hillbilly blues to an almost mellow brand of  ‘hard’ country, although this band don’t really stay in that mode for too long and certainly don’t do mellow. Even the songs that get nearer to ‘hard’ country still have an upfront in your face air and never really show much restraint. In many ways a punk band that is devoted to country but also have bucket loads of talent!
This five piece band is made up of Quinn Clark on acoustic guitar and lead vocals, Charles Biddiscombe,
electric guitar, harmonica  and lead vocal on tracks 3,8 and 12, Brayton Farmer plays banjo, Lindsay Thompson,
bass and Keegan Proctor on drums. The instrumentation was supplemented by Cam Boyce on fiddle, Nathan Burns, dobro and Jason Kuchar on Trumpet and was recorded and mixed by Harry Gregg at Big Dreamer Sound, Edmonton, Alberta. The band share writing credits for twelve of the fourteen tracks with Quinn Clark and Charles Biddiscombe providing lyrics for the songs that they sing lead on. The two songs that are not band originals are a tremendous version of Chris Isaacs Wicked Game and perhaps surprisingly, if successfully, New Order’s Bizarre Love Triangle.  Both lead vocalists have a strongly untutored sound with no attempt to soften the rawness, in it’s
way bringing more raw power to the album with their ‘take us as we are or not at all’ attitude.
Speedy irreverent booze themed songs dominate but there are also a few songs that, whilst not exactly mainstream, are nearer there than to their starting point, showing a surprising diversity and exercising the bands ability to cover all the country music bases successfully. The hillbilly ramshackleness is always there but allied to the energy and feeling this is what gives the album it’s power and appeal and whilst it is steeped in tradition they are a million miles from being enslaved by it, treating tradition with a respectful irreverence!
Album opener Calaboose Stomp is a really good fiery instrumental that serves as a good introduction to
the prowess and punk attitude that follows. Gypsy Woman is propelled by a raw throated gravelly lead vocal with excellent fiddle, twangy guitar and banjo as well as drums and bass, that force the song along at a furious pace and include some excellent harmonies on the story of a man’s ill treatment by his ‘Gypsy woman’ and if that song is not raw enough for you, what follows certainly should be. That is North Saskatchewan Blues the most ferociously punked up song on the album with an incredibly raw, harsh vocal from Quinn Clark that gives this tale a frenzied  blues feel added to by some  excellent harmonica playing. We soon get into the songs that are probably
approaching‘hard’ country with Me And The Whiskey being a really good, (almost!) mellow, country song with twangy guitar and banjo and a (slightly) restrained vocal with some tremendous harmonies on the tale of someone who has been rejected by his woman because of his bad habits and consequently turns to booze! Forsaken is an excellent mid tempo country rocker with tremendous harmonies and hard driving instrumentation that includes banjo and fiddle, on another tale of rejection although this time he is determined to get some pleasure out of being
left behind! Finally, a little remorse is good for the soul on Glory Hallelujah, a powerful tale performed with just the right depth of feeling and with deep twangy guitar and banjo on a song that contrasts Saturday night good times and sinning with Sundays repentance and regret, although you know that Sunday’s feelings of guilt will soon be forgotten!
This is a terrific album from a band that copies no one but blends their influences into their own brand
of roots music that is difficult to fit into any generic offshoot of country music. But country music it certainly is and played with an apparent lack of discipline at times but also an awesome power and passion as well as, fairly
obviously, a huge amount of pleasure.
If you are a fan of ‘mainstream country’ buy this excellent album and shock yourself out of that self imposed lethargy! Who knows, you might even enjoy it. I certainly am and will probably continue to do so for some considerable time.