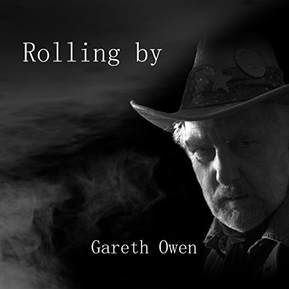 I nearly didn't even play this debut album from Gareth Owen! I was a little put off by the fact that whilst the man has huge talents in other areas and has covered so much in his now 81 years that an album of 'country music by an actor, poet, novelist, broadcaster, playwright and probably much more seemed little more than a piece of pure vanity. Maybe it is vanity, although he does love country music, but it is also an exceptional album with ten beautifully written songs, all with memorable melodies and Gareth's vocal style that is warm, expressive and character laden.
'Rolling by' is most definitely a 'country' album but not in the polished Nashville conveyor belt style; it is a recording that contains as much pathos as anyone could or should require allied to a powerful grittiness, even including a little humour. All ten of the songs were written by Gareth who also took lead vocals and was assisted by a band that included Ruby Turner on backing vocals, James Kitchman on acoustic and electric guitars, Ruth Goller on electric bass and upright bass, Matt Park, pedal steel guitar, Tony Bianco, drums and percussion and Ed Begley played piano, Wurlitzer, Hammond organ, harmonium and backing vocals as well as producing the album and playing a large part in getting Gareth into the studio.
If this album gets heard by some of country music's 'stars' I wouldn't be a bit surprised if we see some of the songs climbing the charts, although none of them will bring the style and easy charm to them that the author has. All of the songs have that easy rolling feel that is just below mid tempo and often seems to appeal to 'country music' buyers but with that extra grit that appeals to me and many more like minded souls! It should go without saying that lyrically this is an incredibly strong album, bearing in mind Gareth's background, but without the added ability to come up with melodies much of that strength would have dissipated leaving a poetry recording that was lost by the music. That was certainly not the case here.
The album opener Lady whiskey gets underway with a nice gentle bass and guitar intro with steel guitar for support before Gareth's expressive vocal comes in on an excellent and incredibly poetic song. The steel guitar and feminine backing vocals support Gareth who is at his gritty expressive best on Walk out the door, a song that contains a humorous element and is lyrically 'classic country' that, at least in part, harks back to the 1950s. The piano and acoustic piano allied to steel guitar support Gareth's vocal on Jesse James and the barber, a classic styled cowboy ballad that uses a humorous element to tell a story of small town lives, with the old outlaw as its focal point, although in reality it is a sad if highly descriptive, story. Final mention is of Dream River, a song that is driven by piano, restrained steel guitar and acoustic guitar on another excellent song with Gareth's vocal blending well with the harmony singers on a tale that has an epic cinematic quality. There is a lovely melodic steel guitar break and the harmonies on the chorus lift the song to a high peak as we visualize a dusty frontier town!
Gareth Owen is a man who throughout his life has added a lot of strings to his bow, all carried out exceptionally well and with a lot of success. On the strength of just this one album he can now add 'country music' (with an edge!) to that bow and there is more than enough in this recording to make me hope this is not just a 'one off.'