THE VAGABAND -
SOMETHING WICKED THIS WAY COMES
​ 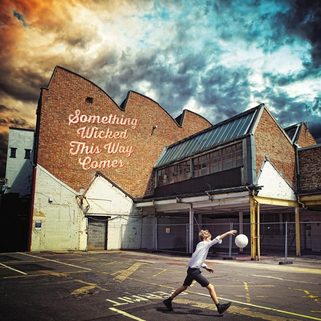 With quite literally, a miniscule number of exceptions throughout the whole of my life (so far!) no matter how good an album is, there is always something that doesn't quite feel right, however minor, or maybe an otherwise great album may have one song or even part of a song that makes the listener think a recording is 97 or 98%, perhaps even 99% of the way to being truly great. The Vagaband's 'Something wicked this way comes' is one of that miniscule number of exceptions, with everything on it fitting like a jigsaw puzzle. Incredible really when you think from the first glimmer of an idea to fruition making an album is more akin to completing a rubic cube than a jigsaw! (I could conceivably do a jigsaw, but a Rubic cube? Forget it!)
This is the third album from the Norfolk (UK) based nine piece 'folk rock' collective, following on from the excellent 2014 release, 'Medicine for the soul' and their 2012 debut 'Town and Country.' It's extraordinary to think that the original eight person lineup is still intact but with one addition; that lineup being José McGill on vocals, guitar and album producer, Greg Cook plays piano and wrote the songs in conjunction with McGill, Patrick Arbuthnot is on  pedal steel guitar, Dan Reynolds, drums, Ali Houiellebecq plays sax, clarinet, flute and whistle, Tristan Roche, bass, Hugh Stanners on flugelhorn, trumpet  and squeezebox, Joe ‘The Bow’ Wright, fiddle and mandolin and newest member Noel Dashwood plays dobro and  harmonica. Referring to them as a 'folk rock' band is a little tongue in cheek, certainly both of those genres are included but there is also country, Americana, a dash of New Orleans gumbo, a little blues, gypsy jazz and probably more besides that I haven't yet even tried to identify. I'm enjoying the album far too much to try and decipher any further styles, something I doubt the band gave much if any thought to, instead writing and performing the numbers as the musical dice fell.
The quality of the arrangements and the playing is tremendous, the vocals, virtually peerless, similarly the songwriting and the melodies those songs contain. Added to that is what I can only described as a loose dynamism that few can equal and none I can think of can surpass. That looseness seems to me to only be possible when a group of musicians are so finely attuned they each know instinctively how the others will react to a musical situation; and yet despite that easy, loose feel, there is a strong sense of discipline that helps create a quite natural dynamism in every song. I know both of this albums predecessors really well and whilst both were tremendous recordings, (one of them having been reviewed on this site) neither was as good as 'Something evil this way comes.'
We kick off with the incredible title song Something evil this way comes, a composition that has a haunting intro with guitar, fiddle and more, before José McGill's evocative vocal comes in. As the song takes off there is a flute in the mix with fiddle and some tremendous harmonies on the chorus that creates as catchy a hook as anyone could want, all helped out by the dark lyrics and atmosphere. As a supplement to the quality of the song It can be fun working out, or trying to work out, the instrumentation which definitely includes steel guitar and dobro, ensuring this is very much an epic 'roots' song but any other attempt at a label is not only unnecessary but pretty much impossible! As One for the road gets underway there is traffic noise on the intro that is soon joined by percussion, harmonica, steel guitar and dobro leading in to McGill's excellent vocal on a song that has a little bluesiness in its makeup. Whilst the arrangements include considerable instrumentation it is never over done, always leaving enough space for the vocals, which along with the band harmonies are excellent on every song. There is a nice keyboard sound and occasional brass with piano included on a song that has an appealing but seemingly controlled looseness. The percussion is slow and moody aided by piano with trumpet soon joining in at the start of An eye for an eye and when you are just getting used to that the steel guitar intervenes. This leads in to McGill's lead vocal and a lovely otherworldly female harmony that eventually shares the lead vocal duties on a song on which the effects help create a deep dark otherworldly atmosphere that veers from haunting to eerie and back again! Finally, on Spiritual man, the piano and McGill's vocal gives the start of the song a (Tom) Waitsian feel with clarinet, harmonica and brass. That feeling doesn't last too long as the song builds and flows into a funky New Orleans atmosphere on this beautifully conceived, arranged and performed track that has a slowly building dynamism that gives it a subtle power that takes it out of time and out of genre!
Whilst there are nine band members, with the large amount of instrumentation that number dictates, the sound is never too dense or heavy, in fact at times despite the amount of instrumentation there is a lovely light almost sparse feel to some of the songs, despite the frequently heavy lyrics. And yet despite that this album is never less than hugely entertaining and certainly, all things considered, an album of the year contender. The Vagaband are not only a multi member band but also multi talented. Every performer seems virtuosic in what they bring to the band but when you add the songs, the memorable melodies, the vocals, both lead and backup, there can be few better bands around at the moment. You want me to name them? Erm .....er........