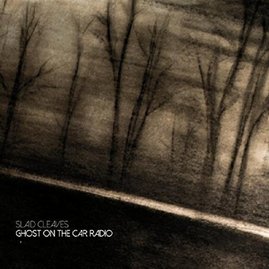 Slaid Cleaves has had a musical career that is approaching thirty years, around a dozen albums and a quality of singing and songwriting that has garnered huge respect throughout the industry and yet he is still far from a household name, certainly in Britain. He often seems to get slotted in somewhere below an artist such as Jackson Browne and yet to my ears he is a better vocalist, with more variation and textures in his songwriting and his early albums are still as rewarding as his new and middle period recordings. His consistency of quality is up there with the very best, in fact he is one of the very best!
Maybe he is a victim of his own desire to move on and not repeat themes and styles, always writing from life and proving difficult to pigeon hole. Certainly there is 'country' in his music but there are also detectable elements of blues, perhaps a little rock, folk and probably more that I can't really put my finger on and you can always be sure of getting lost in his lyrical stories that are wrapped in stunning melodies and excellent performances. Add to that the fact that if you love a warm, expressive vocal style that evokes just about every emotion known to man you really need to collect Slaid's back catalogue as well as this tremendous recording. Thematically as well as musically there is a rural earthy quality to the songs on this album that points strongly towards country, perhaps more so than many of its predecessors, but always with a slight tip towards a modern urbanity.
His songs benefit from the fact that he doesn't write about an unattainable fantasy world but keeps his subject matter down to earth and real, with most of the characters and many of the situations in his songs easy for all of us to relate to. Add his warm, expressive vocal style and some tremendous, memorable melodies and with all of those aspects combined the sum total equates to an artist who is not only at the top of his game but also at the peak of the 'singer songwriter' pyramid.
On songs that can perhaps be loosely termed 'love songs' they are not some idealistic unattainable fairy tale; perhaps there is love but tempered with real every day concerns that involve earning a living, disagreements; in a nutshell the ups and downs of everyday life that we are all subject to, as perfectly summed up in So good to me,
Times were tough but we were tougher
Slings and arrows we did suffer
Scars, we've got a few, but who has not

Words of love and words of anger
Times of peace and times of danger
Never take for granted what we've got
In fact that final sentence could very well sum up his songwriting character, maybe even his real life attitude and no bad ideal to live by. Drunken barbers hand is an unusual song, at least for Slaid Cleaves. It is a slow, fairly sparse song that has a darkness shrouding it, alleviated by a nice chugging guitar and a quite unusual arrangement with deep throbbing bass and an evocative vocal from Slaid, with harmonies that seem to deepen the slightly spooky atmosphere. The whole arrangement is a little unusual, at least in 'contemporary roots music' as is the guitar solo but it works beautifully and is a tremendous song. There is a twangy guitar intro on Little guys a tale that can almost be termed 'red neck' country, with the sound lifted by keyboards on a tremendous and highly descriptive story song about small town life. Primer gray is an absolute beauty of a song with its nice acoustic guitar intro and Slaids evocative vocal, as a haunting violin gradually works its way in with chiming guitar, percussion and harmonies on another tremendous and unusual song that has a powerful haunting quality. Whilst it is easy for the listener to lose themselves in the story the beauty of the arrangement and the melody are haunting from start to finish on this and most other songs on this tremendous album meaning that after numerous listening sessions the rewards continue unabated. There is a deep twangy guitar with percussion and throbbing bass on Take home pay, a mid tempo story song but one that contains an intense sense of real life drama. Maybe that is part of the reason for him not being as well known as his talent dictates he should be. There is so much depth and quality to these songs, with stories that are not simple little ditties but are powerful often cinematic tales from life that the listener needs to concentrate on to take in the events he is singing about and the songs nuances. Then there is the warmth of his vocals, the gorgeous melodies and the excellence of the playing and arrangements meaning that it is impossible to absorb all of this quality quickly. Much of the 'mainstream' may contain at least one aspect of the above but very few will have such uniform excellence as that included on this recording, meaning that it is most definitely not music to be played in the background whilst doing something else, certainly not if you want the rewards that are on offer from these twelve tremendous songs.
As I've already said Slaid Cleaves is difficult to fit into a particular genre although most of his songs have country elements and even the ones that don't could easily cross over, although I suppose many will justifiably and accurately describe him as a 'singer songwriter.' And yet; that really does him a disservice. There are lots of excellent singer songwriters around but very few, if any, that can come up with such an incredibly well balanced album that includes gripping real life stories, gorgeous melodies, tremendous arrangements and stellar performances, all aspects that can be applied to this talented artists back catalogue but this possibly career defining recording in particular.