ZACH SCHMIDT - THE DAY WE LOST THE WAR
​ 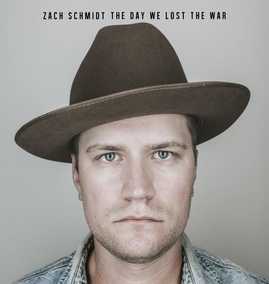 Zach Schmidt works in a musical field not a million miles removed from Cale Tyson and Sturgill Simpson but as is the case with those two hugely talented individuals, has his own unique style that is rooted in 'classic country' but with a distinct 'edge,'if you like; and I certainly like! This is only his second solo recording, the first being an excellent six song e.p. 'Horse or truck or train' back in 2013 and as far as i'm concerned with this incredible eleven song collection, a star is now born!
He is an extraordinarily gifted songwriter, at the very least on a par with the above two artists, with ten of the songs being Zach originals and the only cover being James Maple's Buried in Burgundy. There is a freshness and powerful originality both lyrically and musically that sets him apart from most of his 'peers' with even the arrangements and playing having an unusual and often unique edgy quality. It doesn't end there either, with the lineup on this incredible album containing some astonishingly talented artists in their own right such as Adam Kurtz on pedal steel guitar and Aaron Lee Tasjan on electric guitar. Zach's excellent and distinctive voice provides all lead  vocals and acoustic guitar, James Maple is on drums, Carter Brallier on bass and Kayla Schureman provides some beautiful harmonies.
Zach has a matter of fact way of telling his stories that seems to expand the emotional content and depth of feeling showing a powerful confidence and a great depth of maturity that you wouldn't normally expect on what is basically his debut full length recording. His vocal accent has a strong twang mixed with an excellent melodic range and there are some incredible arrangements that bring a huge diversity, even uniqueness, to the album that promises as much, if not more, for the future than just about any of the new young 'real country singers,' a phrase Zach virtually defines. There are slow weepy ballads that plumb rarely touched depths of emotion and some up tempo, slightly more upbeat songs that bring variety and vitality to an album that, certainly to my ears, literally defines how country music should sound.
The title track and album opener The day we lost the war is an exceptional country song with some tremendous guitar playing and gorgeous steel guitar, with Zach's vocal having a country edge that is descended from a line of expressive vocalists that had at its head the late great Hank Williams. It is certainly 'real country' music but is a long way from the over produced and sanitised material usually found in the country charts. Similarly the following song, Waitin' on me a gorgeous slow moody ballad with a haunting twangy guitar sound, lovely steel guitar and an incredibly dynamic bass and percussion. Zachs warm vocal is at its expressive best on this beautiful sad country ballad that also includes a tremendous twangy guitar solo, adding to the depth and haunting atmosphere of the song. There is a  twangy guitar and lovely steel on Dear Memphis a mid tempo upbeat country song that has in its make up a gorgeous duet vocal from Kayla Schureman that is a perfect foil for Zach and the dynamic percussion. Wendy is an incredible mid tempo tale of 'bad love,' with steel guitar and plenty of twang and as is the case with most songs on this album, writing about it in the cold light of day just can't get close to describing the atmosphere that is created with the peerless playing and Zach's vocals that were literally made for this music. So often recordings are classified as 'country music' when they are pop music with a little country flavour and often over produced but this album in particular probably epitomises 'pure country music' as much if not more than any other album i've heard in this decade and possibly as much as anything this century. There is a gorgeous slow moody steel guitar, gently thudding percussion and restrained chiming guitar supporting Zachs incredibly evocative vocal on Widow's watch, a heartrendingly sad tale that creates a genuinely funereal atmosphere, with the power increased by the gorgeous steel solo, a deep twangy guitar and the beautiful female harmonies. Finally, the melodic acoustic guitar and Zachs dynamic raw vocal work together perfectly on More than I could afford  and are soon joined by the beautiful steel guitar. His vocal is incredibly melodic and expressive but is given more power by his hard accent, something that really contributes the pure country roots to his music
This powerful album of 'real country music,' along with just a few others must surely move the focus from the sanitised music that dominates the charts. Certainly on this album you have everything that is good that can be picked up from Nashville plus an individuality that is usually lacking, alongside great songs, as good a vocalist as anyone could wish to hear and great playing with some memorable melodies. This is a definite contender for my top albums of the year and I suspect most who hear this tremendous recording will agree whole heartedly.