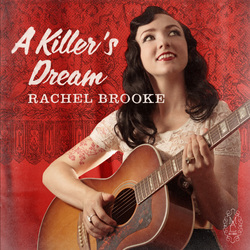 
This is Rachel’s third solo album, (plus one e.p. and a duo album with Lonesome Wyatt of ‘Those Poor Bastards’) and already she is being hailed as the ‘Queen of underground country’ a label that often includes several other variations on this title. On the strength of these three albums and her live work the label is totally justified, with all three recordings containing dark moody music the like of which is played by no one else I can think of and is probably equally well served by the title ‘Gothic country.’ Her 2011 release was my album of the year, with very little else even coming close to matching the extraordinary quality of the superb ‘Down in the Barnyard,’ with it’s dark beauty making me think at the time would be impossible to match. And so it has proved on this new album, despite it’s all round general excellence and what seems to me to be more diversity of styles.
She deserves great credit though for not just making another ‘barnyard,’ instead choosing to, certainly not change genres but, develop her signature sound, apparently deliberately, with a little jazziness cropping up on many of the songs. There is often a slow moodiness with a large streak of darkness that perfectly suits her pure, sensual, at times laconic vocals. That jazzy feel blends well with her pure country style and despite the fact that this usually
equates to western swing, that is certainly not the case here. She is obviously a lot more confident in her always excellent songwriting that has gradually developed further and led her to a stage whereby she has the confidence to vary her style a little, although the equally important element, her moody feminine vocal is as strong as ever. Her support band on the album is  ‘Viva Le Vox,’ for the uninitiated an incredibly tight ‘roots band’ with punk leanings
and myriad influences, with a core of Tony Bones on guitar and Joe Buck on bass, presumably with Rachel on drums as well as guitar and vocals.
All of the songs are written by Rachel with the exception of a tremendous version of Fats Domino’s Every Night About This Time. The scene is set by the slow moody accapella (and very short!) Have It All, immediately
followed by Fox In A Hen House, the title making me expect a piece of speedy, up tempo hillbilly music but it is
anything but, having a slow moodiness, albeit with a discordant clanging guitar that contrasts beautifully with Rachel’s sensual vocal on a jazzy tale about a predatory woman! Late Night Lover has an even stronger jazziness thanks to some excellent trumpet playing, balanced by the hauntingly eerie musical saw! Life Sentence Blues is a sad tale of heartbreak, with Rachel’s evocative vocals accompanied only by her melodic guitar and bass, this in turn followed by a gorgeous duet with her old friend Lonesome Wyatt on a sad story on which Rachel shows she can yodel as well as most! There is a sparse accompaniment from the melodic guitar on a song on which they separately look back on their affair of many years ago and realize love hasn’t died but that they are too old and set in their ways to meet again. The Blackbird is an excellent spooky tale with chiming guitar and musical saw, restrained drums and upright bass on a really powerful haunting, nightmarish murder ballad.
Whilst this album doesn’t quite have the flow of ‘barnyard,’ being stylistically considerably more diverse, it does still fall within the constraints of a dark edgy ‘country music.’ All in all, as with most of Rachel’s music  the finished album is almost literally‘timeless.’ You will certainly hear elements of many different styles and influences but they  blend so well that they actually produce a uniqueness that should be appreciated by anyone looking for originality and melodicism in their music. I can see this album having a wider general appeal despite my not loving it quite as much as her previous work, but ultimately it is a Rachel Brooke album and as such, better than most of what is around at the moment!