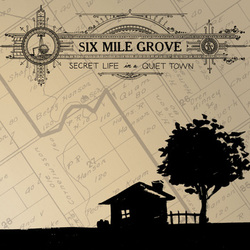 After just a few plays I didn’t think much of this album and was
considering writing a review based on that! Then I played it to a few friends and they raved about it so much I thought maybe I should live with it for longer and perhaps reassess the recording. I’ve done that and whilst I still can’t rave over it as being some sort of classic country rock rooted album, it has with many more listening sessions gone up in my estimation.  The playing, the vocals and the harmonies are all excellent and the songs are very good despite several at first striking me as being a little twee, although now, in the main, they seem quite perceptive.
This is the sixth album released by this very good band in the fifteen years they have been together. The lineup consists of Brandon Sampson on lead vocals, rhythm guitar, and harmonica, his  brother Brian Sampson on drums and percussion, Barry Nelson, backing vocals,  Wurlitzer, Hammond Organ, piano and lead guitar and Dezi Wallace on bass guitar, banjo, and mandolin. A good blend of instruments and compared to a lot of country rock the instrumentation is quite
sparse but the songs do benefit from this treatment, helping to
give the album a little originality that I didn’t hear on first few
plays. Brandon Sampson wrote all of the songs, with several of them being co writes. There are plenty of hooks and really strong melodies to these songs and all are well written and at times quite perceptive of the small details of life. Brandon’s vocals often strike me as being a little ‘too pleasant’ but really it’s impossible to criticize someone whose voice never falters and the last statement probably says more about my tastes than someone who is so obviously an above average talent.
The music inhabits similar territory to the Jayhawks but with a much leaner, less busy sound that comes across as a little mellower and with more of a home based orientation. The songs themselves are in the main rooted in subjects in and around the sentiments felt when living a normal life with well thought out ideals, relationships and living a decent life! I’m still finding a few of the songs a little, if not exactly twee, striving a little too hard for the perfect relationship, although conversely it might be that those particular songs sum the emotions up so well that the almost perfect sentiments and the ability to put them into such succinct words can give some listeners (me for one!) a slightly uncomfortable feeling. A couple of examples being the mid tempo
Sunshine in the pouring rain and This morning, both well written and
containing simple little observations, particularly the latter, that are often  overlooked by many of us. Century farm is an excellent song that in just a few minutes tells the story of a farm handed down through subsequent generations of one family and without being over
wordy somehow evokes a love of the life. It is a mellow sounding
country rocker that is strongly atmospheric with the excellent support of some nice dobro playing. Freedom flowers
is another very good song that fits well on the album but seems to deviate from most of the rest of the album being a song that goes some way to summing up what many feel about war and in many ways hits harder with Brandon’s pleasant vocals and the jangling twangy guitars.
When you set out to review an album it is necessary to try to be fair to the people involved in the making of that album as well as the reader, but eventually you have to say that you have enough information and comprehension of what is going on, to actually start writing. Because I misread the album to begin with I suspect that (although I’ve actually listened to the album many times now) may not be the case with this disc and that further future listening sessions may lead to another upwards evaluation, meaning that it is doing its job in keeping listeners thinking! It may seem a little unfair to write a review when you feel there could still be more to be got out of an album but it would be even more unfair to wait until you are sure, (always assuming you ever are!) by which time the disc could, due to its age, have been consigned to the ‘bargain bins!’
Ultimately, if you like an album that deep down is thought provoking but on the face of it is mellow country rock this will
certainly be for you.