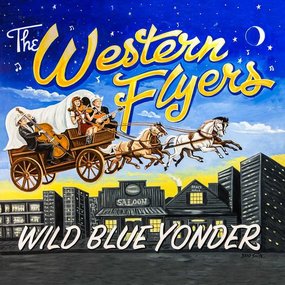 The logistical problems of organizing around a dozen or more people to tour Texas and further afield in a bus must have been pretty horrendous for the early Texas or Western Swing bands and when you consider the expense it would be prohibitive in this day and age. It's quite possible that those costs would have killed the genres (or genre?) unless of course you can produce that full sound with many less people. How about three? Yes I know, a ridiculous aim, but in actual fact it's not so ridiculous when you have a trio of true virtuoso musicians who are devoted to 'swing music.' Enter, The Western Flyers! On record their music really swings but I'm told that live they are even better, so if you get the chance to see them, take it!
To the uninitiated, and I'm no expert, Texas and Western swing are basically the same thing, Texas being the state where the genre/genres took shape and were developed by bands such as  Prince Albert Hunt's Texas Ramblers, The Light Crust Doughboys and on to the most famous of all Bob Wills and his Texas Playboys. The tradition has been kept going by bands such as Asleep at the Wheel and now the stripped down, easier managed Western Flyers, as they all blend elements of country and jazz into the hugely entertaining music that is 'Western Swing'.
The three band members are Joey McKenzie on lead and harmony vocals and archtop guitar, Katie Glassman, also on lead and harmony vocals along with fiddle and Gavin Kelso on upright bass and harmony vocals. Whilst the sound is sparse their playing makes it feel much fuller, thanks to their tremendous arrangements and the already mentioned virtuosity of the trio on these nine classic western swing songs, five lead vocals from Joey and four from Katie, and four instrumentals. Obviously the sound is not as full as the original 'big band' versions of these old songs but the trio has highlighted the important elements of each song and gives as good an evocation as you could wish for and some of the best western swing performances you will hear from a small group. They play with fire and passion and an obvious pleasure in playing together and, importantly, are able to create an evocative atmosphere as befits these old songs. It works out that Katie's fiddle is the dominant lead throughout much of the album but with Joey's guitar playing much more than just support, bringing an expansive sound and rhythm that few others could manage, with Gavin Kelso's bass playing providing not only a solid foundation but helping add to the power of the rhythms and dynamism that is equal in the mix with the other two.
Many of the songs will be known to most people, with excellent versions of compositions such as Along the Navajo trail, I'm gonna sit right down and write myself a letter, Tennessee waltz, I'll see you in my dreams and instrumental versions of Sweet Georgia Brown and Carroll County blues amongst others. As I've already said, every performance is excellent and if you want to hear what 'Western Swing' sounds like when it is stripped down you will not find a finer example of how to do it than The Western Flyers!