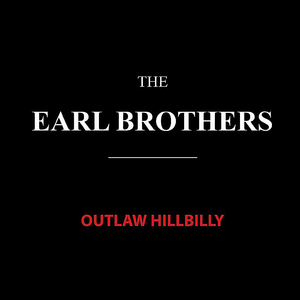 I can’t in all honesty say that I’ve ever been a great lover of modern bluegrass, although I must admit to not having listened to a great deal when compared to other roots genres, so it’s difficult to really criticize. Having said that, much of what I have listened to has  contained too much vocal and instrumental histrionics on which the aim seems to be to play as fast and sing as high as possible making many bands impossible to differentiate from each another. Many could (and probably will) suggest artists that don’t fall into that ‘mainstream trap’ but to that list should be added (if not already at the top of said list!) The Earl Brothers.

On the first few listens the album has the feel of what can almost be described as the missing link between old time hillbilly music and modern bluegrass. Whilst this tremendous recording has the typical ‘high lonesome’ sound there is also an incredible rawness that has a home grown rural feel. The band don’t seem to be trying to play a particular way, instead choosing to let the music lead them on a journey that in some cases can almost be imagined to be a throwback to the American civil war (the instrumental Rebels Romp for example.) In fact there is nothing that really smacks of ‘modern bluegrass’ in these nine terrific songs, all of it, whilst predominately with a bluegrass feel, actually evokes the past far more than the present and in some cases the distant past that we only know through legend rather than recordings, which is probably what makes this tremendous album so outstanding.
Only one member of the band has the name Earl and that is only in terms of a Christian name. He is Robert Earl Davis, singer, songwriter and banjoist of this hugely talented five piece, but the point is that in purely musical terms they are very much a band of brothers who are working on the same wave length.  The rest of the lineup is Thomas Wille on guitar and tenor vocals, James "Lil jimmy" Touzel, Bass, Tom Lucas plays fiddle on Cheater,
Hey Hey and Rebels Romp, with Jody Richardson performing similar duties on Bad Man, Rebels Romp and Bone Down and last but not least Bill Foss on mandolin. The nine songs that in total clock in at less than half an hour, cover the whole album with a dark sinister atmosphere, something you might think this band seems able to conjure at will, but having listened to their first four albums makes me think it is a completely natural style and one that is so powerful I’ve as yet heard very few modern bands that can match them. Irrespective of subject matter every song conjures up an atmosphere of a time and place that probably only exists in the imagination/nightmares, or at least in movies such as ‘Deliverance’ and  involves characters no one should turn their backs on!
Robert Earl Davis wrote, or co wrote all of the seven songs and two instrumentals on this superb album as well as taking lead vocals and to a large degree it is his evocative vocals that enhance the dark atmosphere. The quality of the playing by all band members is virtually unsurpassable, with banjo and fiddle having dominance on most tracks, with the mandolin providing a nice contrast on a couple of songs. The bass, whilst never being the lead instrument is always far enough forward to help drive the sound and add more power and darkness, thanks to the virtuosity of “Lil Jimmy” Touza.
The album opener Arkansas Line is just about as sinister a story as you are likely to hear, with banjo up
front and keening fiddle providing a contrast to Davis’s matter of fact vocals that give the song an even more harrowing impact on this multi murder ballad on which the man wiped out his wife’s entire family! A great murder ballad but thankfully there is nothing else quite this dark, but if you want a little (or a lot!) of lightness in your music then quite obviously you are listening to the wrong album. Much of Hard Times Down The Road, is performed in a monotone with the banjo up front and powerful bass sound, with Davis’s vocals and the harmonies giving an even darker feel as if being played by the ‘hillbillies’ in ‘Deliverance!’ Rebels Romp is a stunning instrumental driven by the melodic sawing fiddle ably assisted by banjo on a tune that evokes the dark era of the American civil war. Tremendously atmospheric! Finally, Don’t Think About Me Unkindly with it’s slow moody mandolin driving the mournful lead vocals and excellent harmonies, tells the tale of  a couple that
start out boozing together but gradually drift apart until she finally leaves him.
The album title comes from a term coined by the band ‘Outlaw Hillbilly Music.’ It’s rare that three words have so perfectly summed up a unique sub genre of such extraordinary quality but they certainly have in this case. It’s a recording that gives a powerful evocation of the music that probably existed in the days before anyone around today was even thought of, much less born! If you listen to this recording and love it as much as I do, there is some very good news, their previous four albums are of a similar quality and still readily available!