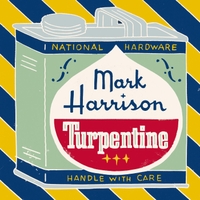 I wrote a positive review about Mark Harrison's 2014 recording 'The world outside,' praising every element of his musical skills from his excellent song writing, virtuosic guitar playing and his warm expressive vocal style. Much of that can be transposed to this review because he certainly hasn't gone downhill! If there is a difference it is that this excellent recording has taken the quality up a notch, because if memory serves me right, whilst I enjoyed 'The world outside' it never struck me as having quite the variety of this new recording.
The thirteen songs on this album were all written by Mark and whilst rooted in the blues, in many cases there is a strong folksiness, even elements of country. The sound is always sparse but includes extra little pieces of instrumentation such as bass, percussion, even an occasional mandolin, harmonica and accordion, but nothing gets in the way, neither should it, of Marks incredibly melodic guitar sound and his warm expressive vocals. This is Marks fifth album including one live recording and it is quite incredible to think that a man as skilled and as authentic at playing a brand of American roots music that few others would be capable of, is actually British and lives and gigs in and around London.
Maybe one of the things that made me feel this album is a slight improvement is that so many of the songs on this recording can easily be imagined as being from an early Ry Cooder album. I know Cooder is a man who can't really be copied, thanks to his ability to inhabit a variety of styles and I am certainly not suggesting Mark has tried to do so on this recording. He is completely his own stylist but It is more the feeling that Cooders early experimental mantle has been passed on to Mark and he too cannot be tied to a hard and fast genre such as the blues. Certainly, in the case of guitar playing, originality and talent I detect very little difference; where there are differences are in the superior vocals and better song writing that come from Mark. Although I've mentioned Ry Cooder several times no one should get the idea that Mark is a Cooder clone or even that the similarities are particularly pronounced. He is very far from a clone of anyone but both men's original guitar sound and ability to invent their own genres that borrow from myriad roots styles is what links them and sets them apart from others.
And so to the songs. So many bad people (out there) is a lovely song that is driven by Marks beautiful classy guitar sound and evocative vocals with a little percussion and an occasional bass drum thud plus some excellent harmonies, but it is his guitar that wins out on this song. It is followed by Hell of a story, with its easy going guitar sound and excellent percussion on a song that is probably a much more defined blues, also includes some really nice harmonies. It has the feel of a song that Ry Cooder could have recorded for one of his early 1970s albums and whilst Cooder was rooted in the blues much of his output was generically ambivalent as is Marks. There is a lovely chiming guitar with a little percussion and deep bass supporting Marks vocal that is at its expressive best on a song that could be as easily descibed 'hillbilly' as blues. In fact when you think about it rural blues and 'hillbilly' are about as closely related as two supposedly separate genres could possibly be. A lovely mandolin adds just the right amount of colour to an exceptional song. On Dog rib there is more excellent guitar work that almost sounds as if it could have been lifted from the 'Paris, Texas' soundtrack, with some tremendous percussion adding to the sense of drama despite the lack of vocals. Could be the best instrumental I've heard so far this year! Final mention is of Dirty business with some nice varied colour added in terms of the accordion, with the usual tremendous guitar playing plus heavy driving percussion that combine to bring a light feel to Marks vocal on another song that could be plucked from the young Ry Cooder!
Many will feel I have made too much of any similarities with Ry Cooder and after listening a few times may still feel the same way. There is nothing that I can clearly define but the feeling I get is that neither artist can really be compared to anyone else but both have their roots in the blues and are not prepared to sit on their laurels in one genre. They both have an easy vocal style, although Mark Harrison's voice is the better of the two, both have a classy and virtuosic command of the guitar and they both push the boundaries outwards on their albums. For me this recording merely confirms what I and many others already knew. Mark Harrison is a hugely talented musician who deserves to be heard by many more people and on the strength of this recording that could well happen very soon!