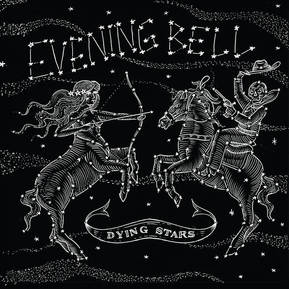 This may be the debut album for Evening Bell but all are experienced musicians with the result being that they have hit the ground running on this both fully formed and excellent album. Seattle singer, songwriters Hart Kingsbery (Davidson Hart Kingsbery) and Caitlin Sherman (Slow Skate, Sunday Evening Whiskey Club) got together with drummer Jason Merculief (Alela Diane, Sera Cahoone, J. Tillman) and Aaron Harmonson on bass and newest member Olie Eshleman on steel guitar.
The often arid desert feel creates an almost otherworldly atmosphere and despite being a relatively sparse recording there is a tremendous density to the sound, something I normally dislike, but it works incredibly well in the context of the 'spacey' often slightly unsettling atmosphere that the album creates overall. Both Hart and Caitlin are high quality lead vocalists in their own right, so they always had an excellent chance from the off, but their harmonies blend better than even they probably hoped for and on many of the songs there is a virtual call and response between them, the blend helping to increase the always  haunting atmosphere.
There are only eight songs on the recording; all of them band originals, but what a tremendous collection they are. Despite the fact that each song has its own self contained story the arrangements and the otherworldly atmosphere, occasionally with a barely detectable edge of psychedelia, gives the whole disc a conceptual quality, in fact on early listening sessions I had to check the albums length to ensure I hadn't missed tracks, it seemingly being much too short. It is certainly not an 'epic' length at 34.29 but it is no hardship to put it on repeat play and just lose yourself in its all enveloping atmosphere of darkness and beauty combined!
The arrangements of the songs are all incredible and I'm still trying to get to grips with the depth and power of most of them. Strange Mama starts with just an acoustic guitar intro and Caitlins beautiful vocal supplemented by the occasional steel guitar before chiming guitars and Harts harmony come in with the piano and we're back to the deep dense atmosphere albeit one that suits the eeriness of the song. There is even a tremendous twangy, 'spaghetti western' instrumental in Western Theme, with the steel guitar, electric guitar and eventually a fully orchestrated sound on an incredibly arid, cinematic piece of music that very quickly works itself into the consciousness. Prairie Call opens with piano joined by steel guitar and soon followed by Harts lead vocal on a slow spacey song with Caitlins harmonies joining in on a reflective tale that is full of longing and evokes the hot arid plains and desert, much of that feeling created by the juxtaposition of piano and beautifully played steel guitar. Finally, What an Angel does is worth the price of the album alone as it starts with a gentle acoustic guitar intro aided by dobro before Hart's mellow restrained vocal comes in eventually joined by Caitlin's beautiful harmonies in a way that is reminiscent of Eleanor Rigby! The drums settle into their almost metronomic groove and the piano arrives on a song that up until this point has a gentle feel. As things change and the atmosphere deepens a spooky sounding guitar gradually segues its way in, creating again that slight edge of an otherworldly psychedlic atmosphere, still with the gentle dobro working in the background. The sound changes so much during its six and a half minutes  course from gentle to spooky to otherworldly and back to gentle but always with a deep strangeness, albeit also with a beautiful melodicism.
Don't run away with the idea that everything is 'strange' on this tremendous album. Whilst I've mentioned 'otherworldly' and 'psychedelia' there are also elements of classic country and 'honky tonk' in the mix and if it has to be slotted into a genre my guess is that country will just about be able to contain the albums broad expanse. It is very much a recording that repays numerous listening sessions; perhaps more so than most, because there always seems to be something going on that you missed during previous sessions. On first listen I was very unsure of its qualities; I now absolutely love it, as you too undoubtedly will!