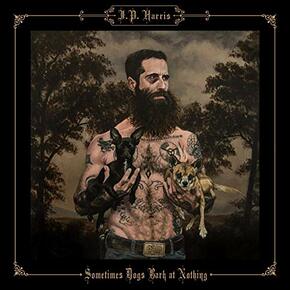 I'm certainly a major offender when it comes to labeling music but have always felt it necessary to apply labels to at least give a clue to what potential listeners might hear when considering the purchase of an album, although a label alone does not suffice, more descriptive information needing to be added. It is incredibly difficult to do justice to a recording of the immense quality and in some ways ground breaking nature of this new J.P. Harris disc by simply using labels and it's none too easy adding additional descriptive  information either! 'Sometimes dogs bark at nothing' certainly can't be labeled as 'traditional country music' and yet the thread from those old time 'hillbillies' is there, but then again so is country rock and a number of other offshoots and sub genres. The music has evolved and added numerous other strands, as has technology, since those far off days of artists such as Jimmie Rodgers and the Carter Family. They would no doubt have loved to have had today's technology at their disposal and I'm sure if they had, the music would have evolved exponentially and 'country music' with its myriad offshoots may or may not have evolved into the sounds we hear today, such as this tremendous recording.
But, although it's a much used term, what qualifies as 'country music?' That all encompassing banner may well fit the expansive music of J.P. Harris, but what does that tell the casual listener? Maybe it tells them that this music is allied to the bland countryfied 'pop' that is so often described as 'country music' and is so beloved of the Nashville music/money machine? If it did get lumped in with them it would be a gargantuan mistake thanks to the quality and originality displayed on this superb recording. I've already referred to it as 'groundbreaking,' but how? Certainly this is not a 'missing link' that includes previously unheard or unthought-of sounds but it is certainly a recording that modernizes and expands 'honky tonk' music's boundaries, perhaps more than most thanks to the sheer  variety as the music sometimes moves away from the country tap root but never so far as to be lost. There is absolutely no sanitization, allied to which JP's lyrics are at times, almost fearless, often hard hitting and blended with tremendous melodic elements and high quality, masculine vocals that could, should and almost certainly will propel JP Harris to the forefront of modern day 'country music.' He can certainly rock, as evidenced by the albums opening track, JP's Florida Blues #1, which I'm sure will initially create the wrong impression of the album! He is equally adept at gentle country balladry and you have only to look at his website address to see where his musical preferences lie. (see below!)
Having loved both of JPs first two albums and despite not having played them for a while it is reassuring to say that 'Sometimes dogs bark at nothing' is at least as good as the previous two. I say reassuring simply because anyone releasing three outstanding albums in a row is fairly obviously supremely talented and very unlikely to release anything 'sub standard' in the future! The ten songs here are all beautifully written and performed by a man and his band who continue to peak on every song. There is variety in subject matter, textures and tempo as evidenced by the already mentioned album opener, JP's Florida blues #1. It gets going with a hard driving Hammond and a cacophony of sound as J.P comes in on a speedy rocker that will have many thinking this is a country rock, or even just rock, album, although there is a steel guitar and a little 'twanginess' as the song progresses, with J.Ps vocal having a raw grittiness that emphasizes the rock elements on this excellent song. That is followed by a gentle chiming acoustic guitar intro on Lady in the spotlight a gorgeous ballad that proves JP can do restrained as well as hard driving as we move into Americana/Country territory, topped off with some angelic background harmonies. When I quit drinking is a classic country/honky tonk song both lyrically and melodically, with an acoustic guitar intro that leads J.Ps vocal in on an easy loping ballad. There is support from the restrained bass and percussion with some excellent harmonies on the chorus and steel guitar to the fore, eventually joined by a twangy electric guitar and latterly fiddle on an excellent country song. Hard road is another speedy rocker, with plenty of 'country' included and is immediately followed by I only drink alone, another slow moody country tale, this time driven by piano and melodic guitar on a song on which it is easy to imagine Patsy Cline having sung.
It is that sort of album, full of variety, always unpredictable and ranging from 'rock' to gentle country balladry, all performed by a supremely talented singer, songwriter and band. Not much more any self respecting roots music or any other genre if it comes to that, fan could wish for really!