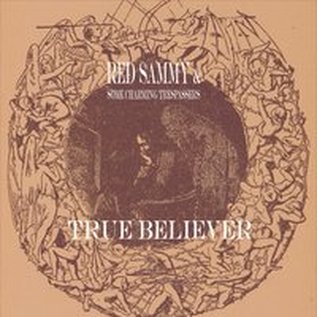 By my reckoning this is Red Sammy's (Adam Trice) sixth album. I've only heard one of the previous five but if the others are anything like that one and this new recording I will soon be investing in them. He must be one of the most interesting of the lesser known (certainly in the U.K) singer songwriters, in fact I still can't work out if he is a hugely talented poet who uses music to support his poetry or if he is a singer songwriter who has a powerfully poetic talent; hopefully that makes some kind of sense! Whichever he is, it certainly works on this recording of eight beautifully arranged and played songs, with some of the most gorgeous melodies and poetic lyrics about life that you will hear.
Sammy's vocal range may not be the greatest but it doesn't need to be, there being so much character and expression that anything that's lacking goes pretty much unnoticed. When you take into account the excellence of the songs, the gorgeous melodies and the tremendous arrangements and playing all any listener will concentrate on is the quality of this all too brief album. Despite any small limitations in the vocals he more than makes the best of what he has on these eight beautifully arranged songs that create a lovely rural, melodic, atmosphere that is difficult to compare to anyone else.
The arrangements of the sparse instrumentation couldn't possibly be improved upon, similarly the playing which is never over done, the supporting musicians adding colour to the excellent songs  without resorting to histrionics. Some Charming Trespassers  consists of John Decker on 1933 National resonator guitar, Julia Wen plays cello, Sarah Kennedy, violin, Rebecca Edwards on beautiful backing vocals and of course Adam Trice on acoustic guitar and lead vocals. Decker has worked with Adam Trice since 2008 and his playing is the more extraordinary due to the fact that ten years ago he 'removed' three of his guitar chord playing fingers with a circular saw. They were sewn back on but wouldn't work so he now wears a slide over his middle finger and plays his guitar in an open tuning!
The fiddle and dobro signal a great start to the first song, Caribou and are soon joined by Sammy's incredibly evocative vocal along with acoustic guitar on a melodic tale that has a lovely rural atmosphere and the blend of dobro and fiddle being absolutely gorgeous. Chicken wire is another tremendous song with Sammy's evocative vocal beautifully accompanied by a tremendous arrangement of acoustic guitar and dobro with the usual fiddle and a little percussion on a song that has a haunting wide open atmosphere. Heaven and electric sky is a strange haunting song with just acoustic guitar supporting Sammy's vocal and a haunting Rebecca Edwards word free harmony responding to each phrase. There is an occasional bass drum thud whilst the eerie vocals are going on but more so than any other song on the album this is reminiscent of no one else. Finally, on Santa Ana wildfire there is an acoustic guitar intro and, unusually, Adam virtually duets with the resonator guitar creating again an otherworldly sound, with Rebecca's harmony blending beautifully on the most sparse, but still gorgeous, song on the album.
Some albums are lyric driven whilst others rely on the quality of the playing, the melodies and/or the vocal quality. This recording is unusual in the fact that virtually everything is of an equally high quality. The lyrics are beautifully written, the melodies are real ear worms, the playing and arrangements couldn't really be better and the more you listen to the album the more addictive Adams vocal qualities become. This is a tremendous recording by a man and his support musicians who really have something to say as well as a slightly different and consequently unique perspective on rural roots music. Despite the sparseness all the different colour and shades tug the listener's emotions in different directions, often by the sheer melodic dynamism as much as the lyrics. There are not too many albums that can lay claim to that.