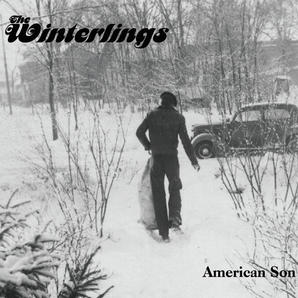 There can be few new albums on which the sound is so beautifully separated as on this excellent new recording from 'The Winterlings.' It struck me on first play that the relatively sparse sound helped the clarity with which you can hear individual instruments although much of that has to do with the excellence of the writing, arrangements and the vocals, with both vocalists easily being good enough to front most other bands. They are not exactly contemporary country vocalists but beautifully evocative, highly individual and powerful.
The Seattle based pair are Amanda Birdsall on guitar, vocals, violin, piano, banjo and harmonica and Wolff Bowden who has a natural and appealing slight tremor in his voice that ensures he sounds like no one else, on guitar, vocals, percussion and harmonica. For once they are a band (or duo) that is perfectly suited to the 'alternative folk' label they have been given by many, although as is so often the case with labels, that particular one doesn't tell the whole story on this, their fourth album.
'American Son' is a beautifully literate album on which the songs can thematically be described as summing up 'the state of the nation' although whilst specifically referring to the U.S can actually be applied to just about any country in a world that is moving so fast few people have the chance to take stock and those who do are not the power holders.
The album opens with The ghost of Leonard, a quite stunning, incredibly dramatic and hugely atmospheric song that is also slow, moody and laden with a tremendous depth of emotion as befits a tribute to one of the late greats of 'deep' music, although there is very much more to this song than a mere 'tribute.' The excellent background vocals and lovely mournful fiddle back up an evocative lead vocal from Wolff that enhances this emotional ride thanks to that perfectly suited 'slight vocal tremor. 'On the title track American Son a nice melodic guitar and thudding percussion support Wolff's excellent lead vocal, with a chunky guitar for support and Amanda's lovely harmonies on the chorus. It is a song that gradually solidifies and deepens atmospherically, in some ways providing a shock for the listener with its dark, gritty lyrics. There is a beautiful vocal from Amanda on Gold, a lovely haunting ballad with the support coming from an atmospheric harmonica with solid percussion and a chiming electric guitar. Owl Mountain is a beautiful duet that is a tribute to said mountain! The gentle guitar and thudding percussion allied to the owl hoots create an ethereal atmosphere on a song depiction of how the mountain got its name. Finally, a gentle acoustic guitar and Wolff's vocal are soon joined by percussion and Amanda's harmony vocals on World to change, a song that in many ways is a tribute to the frustrations felt by many people at the state of the world. Towards the end a haunting harmonica comes in, enhancing the power of the song.
I've deliberately avoided going into any detail about the lyrics on this incredibly literate album. The listener shouldn't expect twee boy meets girl, boy loses girl lyrics; whilst some songs thematically have their roots in love, most of these beautifully compelling songs are quite thought provoking and get to the point quickly rather than being bound up in too much metaphor and allusion. If you don't really want your thoughts to be too provoked you can quite easily enjoy the memorable melodies although I'm sure that the points being made will gradually inveigle themselves into your sub consciousness. 'American Son' is an album that deserves to be heard by everyone.