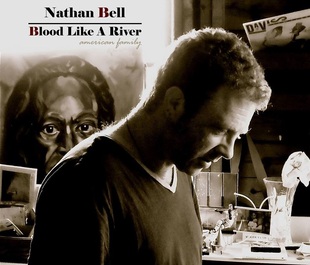 I’ve been a fan of Nathan Bell ever since seeing him play live in Brighton a few years ago. Throughout his career his songs have been of a consistently high quality but this tremendous album of slow moody reflections really should propel him into the same league as someone such as Guy Clark and whilst his songs are perhaps a little more wordy than Clarks they are of a similar depth and quality. It’s musically brave to make an album of such sparse instrumentation and moodily slow tempos and deep often thought provoking lyrics, something that many great musicians have tried to do and failed, but this tremendous album is an exception, again, much the same as the bulk of Guy Clarks work. In fact, though I’m belabouring the comparison between Nathan and Clark, they are coming at folk music from different times and different geographical locations. The similarities lie in not just the depth and weight of their poetic lyrics and music, but also in the mastery of style and the confidence and sheer ability to make music that resonates despite being incredibly sparse.

There is a ‘raw melodicism’ to Nathans vocals that I described in a review of his previous excellent album ‘Black Crow Blue’ as ‘world weary’ with the two combined just about being a perfect sumnation of a voice that brings a cinematic story telling quality to his often dark unredemptive tales. The guitar technique and mastery that he exhibits is second to none, much the same as his extraordinarily well thought out lyrics. It is the occasional addition of a restrained harmony or another stringed instrument, that, added to his cleverly varied vocal inflections, ensures this tremendous album, despite the quietness, has a diversity that ensures the listener can never be quite sure what is coming next.

The songs are, in the main, reflective tales about unhappy lives, and yet the album is never depressing, concentrating mainly on stories that relate to familial matters. Plenty of love, but also great confusion, regret and sadness and often an inability to accept or come to terms with many of life’s downs. It’s that inability that ultimately ensures a little optimism, the lack of acceptance signalling that whether he can or can’t there is often a determination to at least try. From a philosophical perspective that is the most and the least that any of us can do.

The high quality of the songs is such that I’ve just picked a few at random to mention. Really Truly is a powerful paean to human love in all it’s forms and a kick at the homophobic attitudes of some sections of humanity. Remarkable how anyone can cover such a broad canvas with just a few short, but succinct, verses. Fade Out is an emotional, deeply sad song that can be taken as a literal story of someone who was adopted as a baby and is obsessed by his birth mother or as a metaphor for the deep frustration, confusion and inability to come to terms with a situation in which he exhibits little hope. Despite the downbeat tale the structure of the music and vocal gives a lift to the song, aided and abetted by the addition of a mandolin. The Snowman is a terrific poem/song that uses as it’s inspiration Glen Hirshberg’s novel ‘The snowman’s children.’ It tells of someone who as a child survived a serial killer and the constant anguish and guilt suffered throughout life.  Blue Kentucky Gone (She sang the Blue Kentucky Girl) has a tremendous acoustic  guitar sound on a  beautifully world weary and thought provoking reflective song about a fathers love for his daughter whilst Fathers and Mothers is a strongly idealistic tale that if invoked by everyone on the planet would be a step in the right direction. The slow moody and sparse sound gives the story even more impact. Finally, All But Gone (Ghosts explains himself) contains no optimism at all on a sad tale of someone who is burnt out, knows it and can’t do anything about it because he either doesn’t know how or is just too downtrodden to try.

Incredibly this extraordinary album was conceived, written, played, sung, recorded and mixed by Nathan in just thirty days! Makes you wonder what he could do if he took his time! One thing’s for sure; he won’t surpass the quality and depth of this recording.