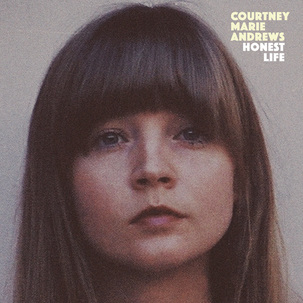 Courtney Marie Andrews is a new name on me despite this being her sixth solo album. She is a lady who, on the strength of this tremendous recording, is not only a hugely talented songwriter but also the possessor of a beautiful expressive vocal style that is often reminiscent of Joni Mitchell. Whilst there is much about this album that is 'country' there is also plenty that would fit into or at least close to 'folk,' perhaps even an occasional, almost imperceptible jazziness, although that is perhaps the feeling I get when I think she sounds a little like Joni Mitchell, particularly in her strong phrasing. In reality she has more in common stylistically with artists such as Margo Price; 'country,' but not really bound by any rules or genre. More a question of casting the songwriting and vocal dice and see where they fall.
It may seem a strange thing to write but to me the instrumentation often seems to be there to merely add a little restrained colour to her gorgeous vocals and excellent flowing lyrics. The melodies are uniformly excellent but I get the impression that Courtney's lyrics and instrumental colour are what she feels best represents her songs, rather than simply coming up with an appealing melody that could perhaps overshadow some of the lyrical content perhaps leading to a reduction in power and expression. That is a measure of the depth of her music, although that should be tempered by the fact that anyone with lesser vocal quality (most singers!) has to use more catchy melodies to get attention rather than being able to rely on the beautiful and expressive voice that Courtney possesses.
The album begins with the lovely mellow Rookie dreaming, the acoustic guitar and plaintive steel guitar leading us in to Courtney's evocative vocal that on first impression was very reminiscent of Joni Mitchell, even in terms of song structure but there is a strong country feel and Courtney has her own completely individual style. The piano, bass and percussion soon add a solid platform for the lead and harmony vocals on a beautiful song. Irene is much punchier with a deep twangy guitar, whilst the first impression of Courtney's vocal was of someone who sounds a little like English singer Barbara Dickson. The piano, bass and percussion, with some lovely harmonies, add just the right amount of colour to a lovely song. Table for one is another song on which her vocal is reminiscent (at least to me) of Joni Mitchell, on a beautiful easy going country song with piano, steel guitar, acoustic guitar, bass and a little percussion. Courtney is that rare singer songwriter who not only has a beautiful voice but it is also incredibly manipulative and expressive in her performances. The final song on the album is Only in my mind with its lovely piano intro on a ballad that has an epic atmosphere as if being sung over the closing credits of a sad emotional 'love film.' It is given more power by Courtneys voice that ranges from soft and mellow to powerful and passionate with restrained strings in the background on an incredibly emotional song. A real stunner of a song, something that can be applies to pretty much every one of the ten songs on this recording!
It is very rare that I read reviews by other people of albums that I'm working on, (at least until I've finished) simply because I don't want anyone else's opinion to influence me. Towards the end of this review I was looking for a little more information and couldn't help seeing a couple of other reviews of this recording and it was most gratifying to see that the comparison with Joni Mitchell has been picked up by other people. However, in saying that there is always a danger that readers are simply going to think Courtney is a Joni clone. In truth that is a very long way from reality. Certainly there is sometimes a strong resemblance tonally and in the phrasing but there is little else to link them, other than the sheer all round quality. Whereas in much of her work Joni often delved into a slightly abstract world, Courtney is much more rooted by observations on life with little use of metaphor. Much of her writing relates to matters of the heart but not in the clichéd sense that many use to define their feelings. You get the impression that Courtney writes from experience as much as she does observations and in her music, if not overtly so, country music is never too far away, something that could rarely be said about Joni. As I said earlier she can also be compared in many ways to artists such as Margo Price and a number of other up and coming musicians on the edgier side of country music, although again there are varied differences.
To sum up, this is a tremendous album by a hugely talented singer songwriter who is certainly not over flattered by the Joni association but she has very much her own distinctive style and unique take on the music she feels. This album really should be the start of something big for a musician who has 'paid her dues' and is now ready for the success recordings of this quality should bring.