THE HIGH STEPPING MUSIC OF
SHEESHAM, LOTUS AND SON 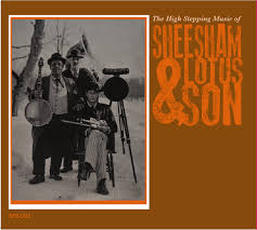 This album, as with their previous recording ‘1929,’ keeps a variety of old blues and hillbilly songs alive, all sung and played with a sensitivity and respect for the old timers who recorded the originals decades ago. Although not necessarily updating the songs, more a reinterpretation, there is a certain individuality that ensures this recording is always highly listenable and entertaining.  They are not merely copying the old style but are actually imbuing the songs with their own power and personality, really evoking those long gone days through their interpretation and blend of songs and instrumentals.

These songs are not merely old hits that have been regurgitated. Some of the originals are difficult to track down so an added bonus is that they have been resurrected, something that would only seem to be possible by people who have a real feel for the music and a desire to keep both them and the style alive. AP Carter, a founding father of not only the Carter Family but also recorded country music in general, travelled widely over the southern U.S collecting old songs that the Carters through their recordings, kept alive, although because it was the very early days of music copywriting, he often claimed credit for many of those songs. No doubt many excellent songs that he found and didn’t record have been long since forgotten and dropped from musical history but all the time there are bands such as this trio the music will be kept alive. In some ways I suppose they are actually updating the music with their arrangements that are certainly not identical to the originals that I’ve heard, but they are not doing it in such a way that the whole balance of the song is changed. As with the old timers of the 1920s there is no separation between blues, hillbilly or even an unusual strain of jazz; it’s all just music! As I’ve said (written!) before the distinct separation in styles between blues and hillbilly, certainly in the rural areas, was purely the result of the commercialization of the recording industry. Not necessarily a bad thing for musicians, certainly in the long term, but it led to any number of generic labels, and yet even that is not so straight forward because the various musical styles were very regional back in those days of limited travel and in the rural areas limited radio, so music genres were pretty much restricted to the regions that developed them.

The trio consists of Sheesham Crow on fiddle, harmonica, kazoo, whistling and vocals, Lotus Wright, contrabass, harmoniphonium (for which I can find no definition!), banjo, kazoo and vocals and finally Son Sanderson on sousaphone and marching French horn. It was produced and arranged, as you would expect, by the band and the songs are all either traditional or written long ago. As you will hear there is very little percussion and no double bass, instead it is the sousaphone that lays a foundation that allows vocals, banjo and fiddle free rein and yet it is much more than just a foundation, also adding a tremendous amount of colouring and atmosphere.

The scene is set by the first track, Chinquipin, an instrumental written long ago by old time fiddler, Edden Hammons, with its sawing fiddle and percussion getting this tremendous recording underway with a tune that is easy to visualize at a Saturday night hoedown. They are eventually joined by harmonica and sousaphone on a composition that gradually builds its intensity. KC Moan has a nice harmonica, banjo and sousaphone lead into the raw vocal and harmonies, with occasional kazoo on an excellent version of the Memphis Jug Bands classic. The song oozes a slightly spooky old time feeling, which is something that separates this band from most others who play in a similar vein. There is a terrific version of Mississippi River Blues, an old Jimmy Rodgers classic that includes some excellent and evocative vocals accompanied by whistling, banjo and sousaphone. As with virtually everything on this extraordinary album it is almost as if these are old recordings that have been recently found and beautifully cleaned up. Maybe they are and this trio is just a front! There is an atmospheric sawing fiddle on Up The Wooden Hills, accompanied by banjo, sousaphone and what I imagine to be French horn on a slow mournful instrumental that conjures a deep, lonesome atmosphere and despite the lack of vocals is imbued with a powerfully dramatic appeal. There is excellent fiddle, banjo and sousaphone on the old Carter family song, My Dixie Darling, with the lead and harmony vocals excellent and the arrangement, whilst different from the Carter’s in most ways just as good and includes excellent banjo and fiddle solos. Final mention is for a track on which I can’t quite fathom the instrumentation. It is Salt And Pepper Drag. It has some strange sounding vocals that don’t actually use words; in fact this may be where the harmoniphonium or possibly an unusual use of the kazoo comes in!? Whatever it is it adds even more variety to an album on which every track blends perfectly with the next but still includes a huge diversity. The sousaphone chugs away whilst harmonica joins the vocalizing, aided and abetted by banjo!

If you have a curiosity about the music of those long gone days much of the original recordings are readily available but if you want to hear modern, if faithful, interpretations you can’t really do better than purchase a copy of this tremendously entertaining and incredibly skilled album and/or its predecessor! Just don’t say that these are cover versions, instead applaud Sheesham, Lotus and Son for ensuring the old music is kept very much alive and kicking. Another tremendous album by a trio that are also said to be extraordinary live!