THE PIEDMONT BROTHERS BAND –
BACK TO THE COUNTRY 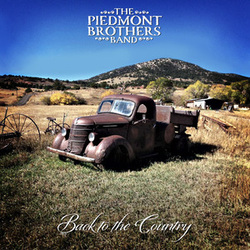 
This loose aggregation of hugely talented musicians, in many ways is probably the most unusual band in the whole history of American Roots music, or certainly one of them! It started on
the internet where U.S native Ron Martin and Italian Marco Zanzi shared a love of ‘classic country rock’ and corresponded regularly. The same musical tastes but separated by the broad Atlantic Ocean as well as a section of the Mediterranean! It is too long a story to go into here but gradually they and other collaborators such as Mike Gallivan on bass and guitars, Katherine Walczyk, vocals, and a few more from each of the two countries have got together physically and electronically to play and record the country rock and folk music they all have a deep abiding love for. However, perhaps due to their love of the music that is so obvious to anyone who has listened to them, they have been able to draw other hugely talented musicians into their musical fold, many of them genuine ‘legends’ of country rock. On this album we have Richie  Furay, (Buffalo Springfield, Southern-Hillman-Furay Band, Poco, Solo) Rick Roberts (FBB, Firefall), Gene Parsons (Nashville West, Byrds, FBB, Parsons Green), Buddy Cage (New Riders of the Purple Sage), Patrick Shanahan (Rick Nelson’s Stone Canyon Band, New Riders of the Purple Sage) and Stephen A. Love (Stone Canyon Band, New Riders Of The Purple Sage, Roger McGuinn), with several of the above also being present on their earlier release ‘PBIII.’
You could be forgiven for thinking this is going to be an album containing nothing but country rock but it
isn’t! There are several songs that have more in common with British isles folk music, a duo of genres that in many ways are at opposite extremes of roots music. As if that is not enough, little is done to try to blend those genres and
ensure they are closer together, other than perhaps a little folksy instrumentation sometimes bleeding into the country rock, thus they provide some lovely contrasts in the music that is played with such commitment, flair and
conviction. To say it works beautifully is an understatement. Such is the quality of writing and musicianship that it just adds diversity to another tremendous PBB album. Much of their music whether country rock or folk seems to
have that almost indefinable ‘high lonesome sound’ providing an atmosphere that tugs at the emotions irrespective of lyrical content. They are certainly an unusual band in this 21st century with their classic take on both country rock and folk making them, in some ways, a throwback to the early 1970s, but such is the quality of songwriting and musicianship that there is no disjointedness, instead becoming an epic album that almost defines the melody driven branches of roots music.
The Marco Zanzi penned album opener and title song Back To The Country, pretty much proves the point, being a gorgeous country rock ballad that thanks to the inclusion of ‘Irish whistle’ also has a nice folksy feeling
with a warm lead vocal from Ron Martin, with Gene Parsons on steel guitar and harmonies  on a reflective tale of returning to ones roots. This is immediately followed by The Dark Stranger a terrific country rock story song that tells the sinister tale of an outlaw and his inevitable end, with a haunting steel guitar courtesy of Buddy Cage. Next up is another excellent mid tempo country rocker, And Settlin’ Down, a song first heard on early Poco album ‘A good feelin’ to Know,’ written by and performed here by Richie Furay and with some tremendous banjo playing by Marco Zanzi. The Road, written by bass player Mike Gallivan along with Marco Zanzi, includes a lovely instrumental blend with banjo, fiddle, steel guitar and mandolin all complimenting each other beautifully on a just about perfect, mellow mid tempo country rocker with Ron Martin and Rick Roberts sharing lead vocals and
tremendous harmonies on a reflective tale of looking back at a life of searching on the road, with all of it’s ups and downs. A True Aching Heart/Cecil’s Jig is an epic seven plus minute composition by Marco Zanzi. It is a folk song that starts with Irish whistle and an extraordinary lead vocal by Cecilia Zanzi, (assumedly wife of Marco) on a tale  that could quite easily be taken from a celtic folk album and is an incredibly sad love song that eventually segues into a fiery hard driving ‘celtic’ instrumental. A true epic! Hugh Moffat’s Carolina Star, is given a beautiful country treatment with banjo and fiddle adding to the gorgeous vocals of Katherine Walczyk on lead and Cecilia Zanzi adding beautiful harmonies. Final mention goes to Rosella Cellamaro’s beautifully evocative vocal on the classic Rick Roberts country rock ballad Colorado. Her vocal gives a lift to a song that was already gorgeous, in many ways making it her own and when you add the band’s sympathetic treatment I wouldn’t be at all surprised if this version is soon talked about as being the definitive rendition!
Rather than being a rock band that plays country music or vice versa, this is a band so steeped in the music and with so much feeling for what they are doing that they are purely a ‘country rock’ band. They don’t blend country music and rock, they simply play in a fully formed style, with sometimes lovely diversions into folk. Utimately this band and their music are so good that rather than being a‘throwback’ to the late 1960s and early 70s they are a time machine journey into the past that includes twenty first century updates! This is a  tremendous album of melody driven roots music by a talented band performing at the top of their game!