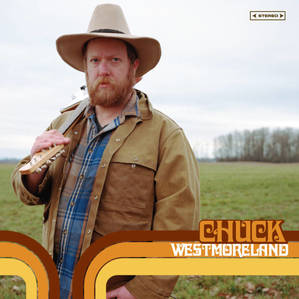 This is certainly an album that will be slotted into the 'country' music racks although, despite only clocking in at less than half an hour and nine tracks, there is a lot more going on than just one generic label would indicate. As the album opened I thought that with his 'classic country' vocal that is so full of soul, and the entry of female harmonies accompanied by the steel guitar this was going to be a very good, with just a little edginess, example of contemporary country music. It is certainly that, but as we move through the album there are a variety of changes as the listener realizes Chuck Westmoreland's songs not only have depth and substance but at times they rock as well! Perhaps even more importantly there are changes of tempos, textures and styles that are all bound together by his tremendously evocative vocals.
Chuck takes all lead vocals as well as acoustic and electric guitars on this, his debut solo album, Andrew Lorish plays steel and electric guitars, Stephanie Woods, background vocals, Garrett Brown is on bass guitar, Tyler Brown, drums, Jake Tinsley, Harmonica, and Kathryn Claire plays fiddle and backing vocals with co producer Sean Flora adding some bass. In 'country music' there are singers with a greater range than Chuck but he can certainly hit all of the important notes, but what he has that many lack is an abundance of warmth, power, character and the ability to evoke a range of emotions and situations. Add to this his excellence as a songwriter, having produced some excellent lyrics and varied melodies on this all too brief collection and we could be listening to a man who is at the start of a long and very successful career.
The album gets underway with a song blessed with a 'classic' country vocal and arrangement, albeit with a distinct 'edginess,' and it's fairly certain most first time listeners will be lulled into thinking this is going to be at least bordering on the mainstream. As the songs unfold you start to realize that not only was that first impression wrong but that this is an album that contains a high degree of originality and individuality and whilst slotting into a country off shoot has much more going on than that term indicates. Even his voice, whilst being at home with classic country, is just as comfortable and emotive when portraying a soulful, folksy rock style. Country music is detectable in just about every one of the nine Chuck composed songs but with a slightly different slant to what we might normally expect,  with some edging close to other generic off shoots but without ever getting out of sight of country music.
A strummed guitar and excellent classic country vocal gets the album underway with There's a pattern in the blood, soon joined by a weeping steel guitar and 'angelic' female harmonies on a song that all listeners will think signals the start of a close to mainstream country recording with an excellent song. Bring on the distorted mirrors! Harmonica and guitars with Chuck's excellent vocal are soon joined by a powerful thudding percussion and bass accompanied by the tremendous female backing harmonies on We will all lay down, a song that whilst 'country' has an arrangement that edges towards an 'alt.' sensibility on an unusual tale. Just voice and several percussive sounds get I remember hearing voices before I came going before the chiming guitar and haunting female vocals come in. The song gradually takes off with searing electric guitars and the metronomic percussion supporting an excellent vocal from Chuck on a composition that seems part mid tempo southern rocker and part country. There is a slow moody start on If I were there you would be home with just vocal and acoustic guitar before being joined by chiming electric guitar, steel and bass as the song rises and falls with a fiddle intervening and deepening the songs emotional feel.
It's quite strange that an album which gets underway with a strong 'contemporary country' feel ends nine songs later with the listener marvelling at a recording that is so unusual. Most people with Chuck's vocal 'pipes' would probably choose to play things a little safer and record a purely 'contemporary country' album rather than stretching into 'southern rock' and quite a few points in between. There is a powerful dynamism to all of his vocal performances that makes me think he is genuinely different to his contemporaries who work in vaguely similar fields. Take into account the fact that his songs are often quite unusual, with arrangements that whilst not ground breaking are different to just about anyone else and I reiterate what I said earlier, that this is a man destined for great success, hopefully by staying with this slightly edgy 'country' music rather than drowning in the mainstream.