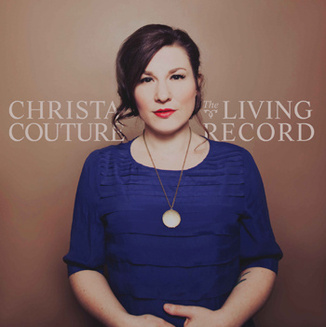 If ever an artist has deserved a piece of good fortune it is Christa Couture. This is not the place to delve into the
quite harrowing problems she has had to endure but suffice to say she is an example to all of us who moan about minor everyday problems. Of course, in the music industry an artists suffering is not necessarily going to bring success
but fortunately Christa has talent to burn. Evidence of that is contained on this beautifully written, sung and played collection of songs that includes tales that probably just about fit under the ‘country’ banner, despite the fact there is so much more to her.
Those beautifully expressive vocals are so good that a piece of plastic in many ways seems too restrictive for the
strength and versatility of her voice and her exceptional, descriptive songwriting, some of which barely veil some of the trauma she has suffered. She is a genuine example of a singer songwriter who has risen above adversity to
produce a beautifully conceived work of art. She is helped by the fact that her writing is so descriptive and whilst if the listener knows a little of her background, some of the lyrics can and should be seen as highly personal, the
album is far from depressing. On the contrary Christa sums up various situations with a great deal of reflection and acceptance, no self pity and the determination to forge ahead regardless. When you add the fact that there are
some gorgeous melodies as well it’s difficult to see any way the album can fail, despite it’s prescence in a crowded genre. It would be nice to think the cream does sometimes rise to the surface.
The recording has a lovely clearly defined instrumentation, exactly what is required with songs that have a lot to say, not all necessarilly thought provoking, but evoking certain feelings and sentiments as all the best tales do. The production is courtesy of Steve Dawson, a man who has also produced brilliant albums for the Deep Dark Woods and Old Man Luedecke and it is that definition he brings to the instrumentation that gives the vocals even more clarity and merely serves as beautiful support rather than exerting any domination.
The album opens with the lovely You Were There In Michigan with it’s nice easy going instrumentation that includes a chiming guitar sound and light repetitive snare belied by the fact that it is a song tinged with sadness at an enforced fresh start. It is that slight contradiction on this and a few of the other songs that gives the album even
more appeal, as if bringing darkness and light to every song regardless of the lyrical content. Good Bayou is a
really catchy song with a chirpy feel that includes a nice shuffling drum beat on  the story of a young
relationship that eventually has to end, a song that in some ways evokes (for me at least!) a young Joni Mitchell. Lucky Or Lost  is a piano driven, incredibly poignant tale about life and luck and wondering if the ability to
overcome adversity has been stretched too far, a song that I would imagine is one of those that falls within the ‘intensely personal’ brackets. This is followed by Pirate Jenny And The Storm a complete contrast to it’s predecessor, having a dark vaudevillian feel and a quite diverse instrumentation that brings a slightly humourous element, carried by her gorgeous beautifully textured vocals. Towards the end of this excellent and stylistically quite diverse album is Pussycat Pussycat a really good upbeat tale of her life whilst living in London for a year, with an excellent instrumentation and her usual evocative lyrics, followed by what can only be described as a lovely comfortable slow moody late night love song on which she shares vocals with Jim Byrnes, also accompanied by steel guitar and organ on a tale that is dedicated to her husband. Lucky man to have a song like this written about him!
The diversity of tempo’s, lyrical content and instrumentation makes this an album that should hold some
appeal for anyone who loves beautifully conceived recordings that include a great deal of personal experiences. Despite some of the more harrowing elements there is a lot of lightness to most of the songs, as you would expect from someone who has, hopefully, turned the corner and started afresh. That is certainly the impression I got from this beautiful collection of songs, many of which must have provided a difficult path for her to retrace. Although I said earlier she deserves success for what she has been through the main reason is that she is a hugely talented lady who can probably sing any song in any genre that she chooses and is no slouch when it comes to penning them!