THE BUFFALO SKINNERS - CEASE YOUR DREAMING
​ 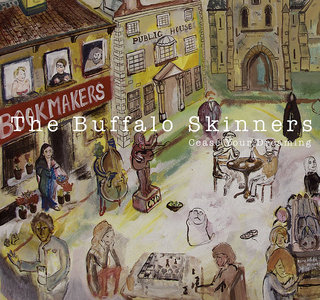 This is a difficult, in fact impossible album, to neatly slot into any one genre. Their influences alone give some indication with just some of them being 1960's rock & roll, folk, blues, soul and with elements of country or at least country rock all being poured into the melting pot. What comes out is a delicious stew that is occasionally reminiscent of the 'Band,' sometimes has the appealing ramshackleness of the 'Vagaband' and a few of the old rock 'n' roll bands of the past, even an occasional country rock flavour.
The Buffalo Skinners are one of the best young British roots bands I've heard for some time. They inhabit a territory similar to the once promising but now much less so Mumford and Sons although this band actually have more talent, better songs and perhaps more importantly are not limited by any generic boundaries, with much more originality in their makeup than most.
The band is based in Sheffield, England and consists of Kieran Thorpe on keyboards, mandolin and vocals, James Nicholls plays violin and vocals, Peter Seccombe is on guitar and vocals, Miles Stapleton, drums and Robbie Thompson on bass and vocals, with all except Miles Stapleton contributing to the songwriting and lead vocals. Thorpe and Stapleton are relative newcomers, having joined the band just seven months before going in to the Yellow Arch Studios to start recording this, their third album, this one produced by Mercury Music Prize nominated producer Colin Elliott. Any band that can lay claim to four excellent lead vocalists who also contribute tremendous harmonies must really have a great chance of success and the Buffalo Skinners certainly do. Their sound is tight and varied with all of them proving to be gifted musicians who are all equally comfortable in their finely blended and incredibly varied songs and styles.
The album gets off to a nice percussive start on We get along, with guitar and excellent lead and harmony vocals on an upbeat mid tempo song that has a lovely ramshackle feel eventually lifted further by a fiddle intervention. It's certainly not bluegrass but it does have the easy going but tight casualty of artists such as the Felice Brothers or Old Crow medicine Show. Play to lose is difficult to pigeon hole generically but a very good song that has a fiddle meandering through it, with the usual excellent lead and harmony vocals driving the song at a nice mid tempo. There is an excellent guitar and keyboards break midway with fiddle adding to the delicious mix! There is a nice swampy percussion and guitar on Monkey on your back, a song that gradually takes off as the percussion gets firmer and a fiddle comes in, still retaining the swampiness albeit a much darker, deeper sound. There are the usual excellent lead and harmony vocals, with the fiddle gradually taking over the lead, adding further depth to the atmosphere. A nice gentle acoustic guitar sound gets Sugar cane underway with a high lonesome lead and harmony vocal then a twangy electric guitar gradually works its way in and the sound soon becomes much fuller with powerful bass, percussion and fiddle adding to an excellent sound on a quite haunting tale. A lovely melodic guitar gets Delta blues going slowly, soon joined by an excellent lead vocal with moody fiddle, bass, percussion and haunting harmonies before the song eventually changes texture to a much more upbeat funky mood and then comes back down again giving an epic feel to a hugely appealing tale. Finally, on Remember me the acoustic guitar and a different but still excellent lead vocal gets a mid tempo song underway. It almost has the feel of an old south western country song or perhaps even a Tex Mex flavour, eventually gaining a fuller sound with harmonies and fiddle, on another song that has a really strong and diverse feel that seems to incorporate several other styles, all blended beautifully.
This really is a genuinely talented young band who have everything in place to succeed, from excellent songs, skilled playing, tremendous lead and harmony vocals, a strong slice of originality and an occasional ramshackle feel that can only appear if the band are as tight and so obviously enjoying themselves as this one are, or if they're rubbish! The Buffalo Skinners are a long, long way from being rubbish!