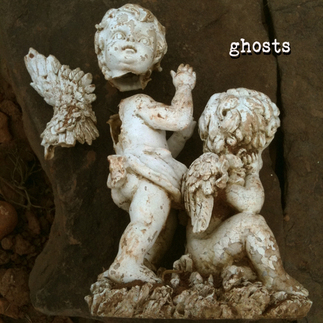 
I was aware of John Whipple through his tremendous 2009 recording ‘Bible Milk’and it’s pleasing to say this current offering is, to my ears, even better,  being stylistically quite similar but without the comedic links between songs and with more of a sparse sound. That album, whilst I still love it, when compared to this current offering has the feel of a pretty much unique singer  songwriter trying to find his feet, whereas on Ghosts, everything about the album feels fully formed and in some ways more of a ‘whole.’ From memory (I haven’t played it for a while!) Bible Milk has more of a bluesy feel, whereas
this has a sound and texture that is more rooted in folk music but with a nod to blues and old timey and whilst this is sparse and all acoustic the tempos, themes and emotions seem to vary more than can usually be expected on any album in this loose generic field. There are not too many artists who would have found it possible to have made an album with just one voice and so few instruments and
to have somehow incorporated such great variety into the proceedings. Everything on the album is slow and moody, nothing really getting close to even mid tempo, and yet his songwriting, expressive vocals and his mastery of dobro, banjo, acoustic guitar and harmonica are such that the listener is always kept wondering what will come next.
His raw but relaxed vocals, that he seems able to modulate and manipulate to suit the mood of the song, are perfectly suited to this blend of old timey and predominately modern American folk that is neither country or blues but contains a little of both. He is an extraordinarily gifted lyricist, some of the twelve songs having humourous elements, some philosophical, some harrowing, hard hitting, sad and just about any other emotion you can come up with. All of those lyrics are highly descriptive and the clichéd term ‘painting musical pictures’ could well have been invented for the album. This, allied to his selection of the instruments required to get the best out of the songs, plus his raw expressive vocal abilities equals an exceptional, at times thought provoking recording that everyone should have in their collection.
Album opener I Got Faith is an excellent acoustic guitar led ballad  about a couple with a cynical outlook
who can’t help sniping at each other, the song including a great line  when referring to the ‘Bible crazies’  of “Because I want to know what it’s like to love a lie rather than hate reality.” His easy going vocal gives a tongue in cheek feel. This is immediately followed by Another Day Above Dirt, a hauntingly eerie tale with a backwoods feel and banjo to the fore, with even his vocals having a sinister edge whilst telling about the pointlessness of possessions whether material or human and that everything fades and dies. This has the atmosphere of an old deep blues song. This Ain’t Living is another slow hauntingly eerie song with a beautifully played dobro on a hugely atmospheric and harrowing blues song about the mind numbing struggles with poverty of a family with no real hope. If a little lightness is needed following these two dark tales it is provided by Douchebag Bar another slow moody tale but this one leans towards country with acoustic guitar and accordion on a tale of a musician playing in a sports bar and a taste of the people that inhabit it. There is a little humourous slant to his observations of the bar inhabitants as he plays his music, again on a highly descriptive tale. Hard To Love is an exceptional acoustic guitar led song that sums up the struggles of anyone trying to make it as an original artist in any of the arts, probably a song that is close to the heart of this itinerant musician. Last but far from least is The Ballad of Phil the Alien  the story of an alien who lands on Earth, that is both humourous and at the same time a tremendous philosophical tale done in a pleasant talk vocal to the accompaniment of an acoustic guitar!
It’s impossible, on the strength of just a couple of albums, to justify a claim that he is in the class of John Prine, Guy Clark, Townes Van Zandt or a few of the other great singer songwriters, but if he continues to progress in the way he has with this tremendous recording it won’t be long before that comparison is justifiable. He’s very, very close now!