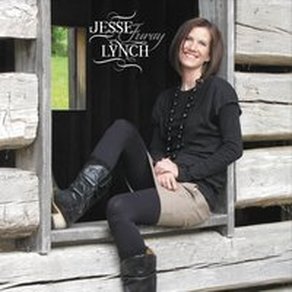 Jesse Furay Lynch's father was present at the birth of 'country rock' and was in fact one of the architects of the genre that made people begin to realise just what can be done by avoiding recognition of musical boundaries, so it should be no surprise to anyone that Jesse is a talented vocalist and interpreter of 'edgy' country songs. Her father is Richie Furay, co-founder of Buffalo Springfield and Poco, a band that many (me included) feel were robbed of the huge worldwide acclaim their talents demanded, by the Eagles more sanitized and over produced version of country rock.
Having grown up through Richie's career Jesse was obviously very familiar with his music and again it should be no surprise that three of her interpretations on this her debut solo album were written by Richie. Those three are all taken from Richie's solo or Richie Furay Band years rather than revisiting the work of the two above named bands. I'm not sure that these nine songs can all be categorized as mainstream country music; even the gorgeous ballads having a lovely appealing edge to them that has more of a country rock flavour, perhaps stylistically reminiscent of a young Linda Ronstadt or Emmylou. In saying this is not mainstream country it could easily 'crossover' because it is not music that challenges the listener's senses but by the same token is far from what is sometimes chillingly described as 'easy listening!' It is an album that is easy to listen to though thanks to the excellent arrangements and Jesse's beautiful interpretive style on these nine songs. She has an incredibly powerful voice as evidenced on songs such as Satisfied, but she is just as at home with the gentle tender ballads that require subtlety, something she is able to produce at will. Maybe it helped having 'dad' work with John Macy on the production but this recording has none of the unsure probing that many singers bring to their debuts through lack of confidence and experience. Of course, Jesse is an experienced musician having sung backup vocals with the Richie Furay band for a number of years now.
She is helped out on this recording by Chris Luezinger and Dan Dugmore on guitars, Hank Singer on fiddle, Michael Rhodes, bass, Dennis Holt on drums and Pete Wasner, keyboards who all allow Jesse's vocals full rein but add some beautiful instrumental hues to the songs. Jesse's clear, totally committed vocals are what dominates the album and are what after every listening session leaves the biggest impression. Of course she is not hindered by the quality of the songs she chose that, Richie excepted, came from a variety of writers.
Baby why has a nice acoustic guitar intro joined by percussion and a lovely dobro with Jesse's clear evocative vocal excellent on a slow moody ballad that came from the pen of Richie. Whilst it is a big power ballad there are none of the over produced cloying strings so loved by the mainstream, thus ensuring the song itself is not lost in a wash of sound. There are several occasions in the song where Jesse strains for and achieves even more emotion, adding yet more power to the song. There is a gorgeous version of the Nanci Griffith 'classic' I wish it would rain, with a gorgeous arrangement and an instrumentation that includes excellent bass, percussion, dobro and banjo with the late Marco Zanzi on backup vocals and featuring the talented group of musicians that he helped create, The Piedmont Brothers Band.' The tremendous Fallin' into your love is virtually a mid temp country rock song, with steel guitar, tuneful electric guitars, fiddle, bass and percussion, with Kenny Passarelli adding to the vocal harmonies provided by dad, Richie on most songs.
Overall this excellent collection of songs has a strong assertive feel and is probably as good a debut as anyone could wish for. Personally I'm always strongly attracted by albums on which the singer has written at least a few of the songs but would also say that not all singers are songwriters, quite likely something that songwriters are hugely grateful for! I don't know if Jesse has inherited dad's writing talents but if she hasn't she is certainly the next best thing and that is a beautiful interpreter of other people's writings. As the start of her solo career it is confirmation that musical talent has been passed down and should now, with any luck at all, point the way to a successful future.