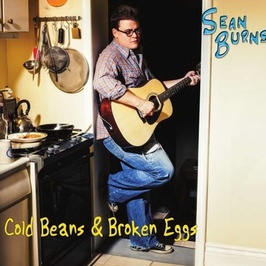 
Sean Burns is a hugely talented Canadian singer songwriter who plays a brand of country music from way out on the left of the mainstream. Until receiving my review copy of this new album I was totally unaware of his existence, but am now eternally grateful that his rich music has been opened up  to me. This is his third album and I can’t wait to get hold of the previous two and see if they are anywhere near the quality of this current offering that I can’t really imagine being bettered.
He is the possessor of a rich warm voice that has a similar quality at times to artists such as Don Henley, but with less affectation and much more emotional depth and expressive ability. All songs on this high quality album are Sean Burns originals with the exception of Whiskey Glass which is by Bill Gaunce and Wade Mosher, Tumbleweed, written by Sean with Wade Mosher, Bernadette, by Sean and‘Drummer’ Tim and Rock n’ roll nights and honky tonk days by Wade Mosher who also carried out production duties. The outstanding band has Sean on lead vocals, acoustic guitar and electric bass, Derek Downham on drums, Wade Mosher plays electric guitar, accordion, mandolin, organ, percussion and backing vocals. These three play on
every song but gorgeous background vocals on most songs  are provided by Denise MacKay of the ‘Americana’ (or perhaps Canadiancana would be more appropriate) band‘100 Mile House.’ Her voice, rather than just filling out the harmonies adds extra quality to this already tremendous album. They also have Mike Burns playing acoustic and electric guitars on some of the songs as well as various other excellent musicians providing such as bass, steel
guitar and more keyboards. It would seem from this list of instrumentation that the album is going to have a dense sound, but everything is wide open and spacy, even at times quite sparse, allowing Sean’s high quality evocative vocals full rein and allowing the songs stories to dominate.
There is a nice diversity of subject matter, tempos and emotions throughout the whole album with many of the songs involving travel and for a variety of reasons, from love to drug smuggling, even including a sad ‘trucker song.’ The album gets under way with Whiskey Glass, a song that has a nice spacy intro with the sound of a harmonica and acoustic guitar followed by Sean’s excellent vocal. It is a tremendous mid tempo story song with nice electric guitar and has an easy going feel, despite the lyrical content that is far from easy going. This is followed by a song that would have suited the Eagles four decades ago, had they been talented enough to have written it. It is Tumbleweed, one of the best mid tempo country rock tales I have heard for a very long time, with everything about the song as near perfect as anyone could wish for, from it’s chiming spacy piano intro to the conclusion three and a half minutes later. The instrumentation and Seans lyrics and vocal on this gorgeous song create an atmosphere that has probably never been bettered in this generic field. Everything about it is excellent, the story, instrumentation, lead vocals and the most sublime harmonies and steel guitar sound that can be imagined, on a cinematic tale that entails lawbreaking, betrayal and a fresh start. It’s rare that you get a song of this quality on an album but it is almost matched by Texas, a slow moody ballad with nice acoustic guitar and gorgeous steel guitar and harmony vocals, allied to Sean’s evocative storytelling on a pretty much faultless song and performances about a young man torn between sporting ‘heroics’ far away that would help his financially struggling family or staying to help the family on their farm and to be with his girl friend. A choice many have faced …..….. fame and fortune or happiness. Joseph Hill is a terrific  twangy, guitar led piece of honky tonk on the atmospheric tale of a trucker and I Drank Some Whiskey is a slow moody story song with nice acoustic guitar and steel and harmonica on an epic tale
centred around the harshness of farming life. Final mention goes to Cab Driver a tremendously emotional heart string tugging song that you would never expect from the tale of a taxi driver, albeit one who is an immigrant
single parent who gets robbed. The lovely accordion sound adds to the atmosphere, further lifted by Denise MacKay’s (100 Mile House) gorgeous harmony vocals.
Rightly or wrongly the ‘country music’ label that is currently in use always seems to me to refer to the mainstream ‘country pop’ that is made for the masses. This album has a lovely edgy feel that I can’t say I’ve ever detected in the aforementioned style and yet this is neither ‘country rock’ or ‘alt. country’but it certainly has
elements of both, in fact it doesn’t require too much imagination to see, with decent promotion, this rocketing up the best seller lists! Whether it will or not remains to be seen, but it certainly should do and is quite possibly an
album that can cross over. A great album that I suspect I’ll be playing for a very long time!