THE WESTIES - WEST SIDE STORIES 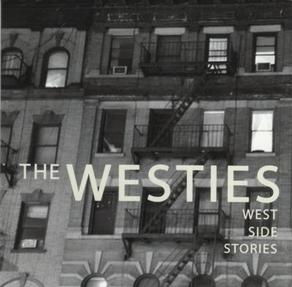 Songs such as the ten on this album can only be written by someone who has experienced some dark places literally as well as metaphorically. Michael McDermott is such a man. It is not necessary to explore his life here in any detail but suffice to say that when he met Heather Horton, his partner in the Westies, it did him no harm at all!       His vocals, whilst containing an underlying darkness, have a similar appealing quality to Bruce Springsteen in reflective mood, whilst Heather Horton's expressive, gorgeous vocals enhance and twist the emotional perspective adding a little light to the darkness.

That dark, if realistic atmosphere envelops most of the songs on this album that is just so good it is impossible to not foresee a bright future for this line-up. The musicians in the band are skilled and sympathetic to the depth of feeling that has gone into these songs that ensure this recording is quite addictive and more than repays repeated listening sessions. It is certainly not a blues album; it's just as certainly not country, folk or rock and yet all of those strands in varying degrees can be found on this fully formed recording that requires nothing further to improve it apart from millions of buyers whose listening habits will be enhanced by the deep and sometimes harrowing raw beauty of a great album.

The songs rarely reach mid tempo and yet in a dark bluesy way it really rocks, thanks to the realism of the stories that you know are written by someone who understands the dark world many of the songs inhabitants live in because it is, or has been his world. The whole album is steeped in an atmosphere redolent of Robbie Robertson's first and best solo album, not so much lyrically or indeed, musically, but with that all enveloping deep warmth, despite the darkness of some of the lyrics, and a powerful sense of fulfilment. Virtually every word of the lyrics is believable thanks to the quality of McDermott's lyricism and the total commitment of everyone involved in making this such a memorable recording. Many albums steeped in this kind of darkness try to avoid too much melodicism often losing power as a result but the Westies never fall into that trap. Even if you just want to listen to this album for it's lovely tuneful melodies you can, but I don't suppose it will be long before you also get dragged into and lost in the highly descriptive lyrics. There are tales of hope, despair, love, death, regret, lost love and murder, quite a list but all found in plentiful supply on this tremendous album that is an exercise in deep emotions and actions, often with a sense of a realistic moving on following whatever picture the story painted.

Album opener Hell's Kitchen has the sound of a gorgeous mellow ballad with a lead vocal that sounds a little like Springsteen at his most reflective. The excellent solid bass and drum, with chiming keyboards and melodic guitar drive a song steeped in a dark realism. It is a tale of harrowing lives accepted as the norm, revenge and life lived 'on the wrong side of the tracks' told with an incredible level of believability and a beautiful melodicism that actually increases the power of the story. There is more slow moodiness on Trains another quite sparse song with an atmospheric instrumentation that consists of bass, drum, haunting violin and occasional deep twangy guitar with Heathers lovely harmonies assuaging a little of the dark atmosphere and another tremendous vocal from McDermott on a song that intensifies it's dramatic atmosphere as it progresses. There is an acoustic guitar lead on Say It ...... with vocals reminiscent of a cross between the 'Boss' and Tom Waits! They are soon joined by piano on this terrific duet with Heathers gorgeous vocal, reminiscent of Carrie Rodriguez, contrasting beautifully with the dark atmosphere on a gorgeous hopeful love ballad that you just know will ultimately come to naught. It is certainly not the archetypal love ballad, with a complete lack of punches being pulled, whilst  both parties unburden themselves by letting the other know their feelings, in the process knowing this love story is doomed. There is an unusual arrangement on Death a sad harrowing murder ballad about somebody convicted and facing the ultimate penalty, sung in an almost matter of fact way by Michael McDermott with occasional intervention by Heather that adds to the haunting hopelessness felt by the subject. Bars is a tremendous melodic story song that includes chiming guitar, sometimes joined by a deep twanginess and occasional harmonies from Heather on an evocative emotional tale that tugs at the heartstrings in a way that very few if any other writers can match. It is a song that actually not only tells of hope, but also fulfillment, albeit with the knowledge that both those feelings are fleeting, with the trick being to prolong them as long as possible, the line Sometimes you need the darkness in order to ever see the light giving a pretty accurate summation of how to keep a modicum of sanity in this life!

This is a tremendous album that combines the beauty of the melodies with the harshness of some of the tales that are given yet more impetus by the realism of the twists and turns and total lack of sanitisation, even on the 'love songs.' If you like music that is fleeting and doesn't remain long before moving on to the next manufactured 'star' this challenging album is probably best avoided. On the other hand if you like great songs that remain long in the memory, evocative vocals and perfect arrangements please let me know if you find better than this. I'm not expecting to hear any time soon!