THE GEORGIA SHACKLETON TRIO -
THE DOG WHO WOULD NOT BE WASHED
​ 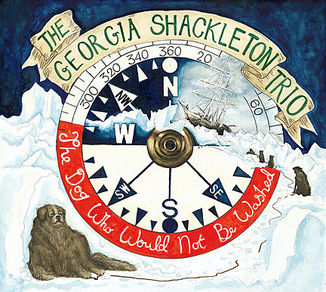 I first became aware of Georgia Shackleton when she contributed to the 2013 debut album by Rattleshack an extraordinary band that, whilst there is much more to their music, play their own blend of 'hillbilly' and folk! Georgia's writing, fiddle and vocals were absorbed beautifully into the band, bringing an excellent diversity to their sound and at the time I felt she could well move on to become a band leader, as she has now done!
Georgia handles most of the lead vocals as well as exhibiting her virtuosic fiddling skills, Aaren Bennett plays the guitar and contributes some excellent lead and harmony vocals and Nic Zuppardi plays mandolin. That mix of fiddle, mandolin and guitar makes the music more difficult to pigeon hole but certainly the dominant feelings are of English and American folk, in fact it is very much an album that can be tied comfortably in to the 'Transatlantic Sessions' of just a few years ago.
This is the trio's debut full length album, following on from an e.p and a live mini album both of which were released within the last ten months or so, but I suspect with the talents they share and the wide scope within folk music that they cover this will not be a one off! I think it is artists such as this trio and bands such as Southern Tenant Folk Union along with just a few others who, using perhaps British folk music as their tap root but with an almost as strong feel for the American strain, are starting to blur any boundaries that may exist between what have often been separate, if related, sub genres of the same thing. There are songs on this recording that can easily be viewed as English folk songs and Georgia's beautiful vocals are certainly a match made in heaven for the genre, but there are other songs that are much less generically specific, making the album that much more powerful and perhaps easing the trio into an area that will very soon make their style recognizable as a unique blend. Perhaps a large contributor is the fact that songs on which Georgia's fiddle dominates the leaning is towards traditional British folk music, but those on which mandolin or guitar are to the fore the edge is towards America, or maybe I'm just waffling about something that is not there except in my imagination! Whatever the reason, I struggle to listen to full albums of traditional folk but this recording is getting played over and over again in my house.
Of the songs, six were written by Georgia, one excellent instrumental by Nic Zuppardi, four traditional and one by Billy Ed Wheeler. The album gets under way with a Georgia original, War pigeon, with a mandolin and guitar intro before Georgia comes in with her lovely vocal, with some excellent harmonies supported by her fiddle on the tale of a world war one homing pigeon. Initially the feeling is of an English folk song but the mandolin takes the song out of that setting and into something more universal or at least Appalachian! There is a mournful violin intro with mandolin in the background before the sound balances out on Endurance a quite chirpy, yet epic tale that has a cinematic quality and tells the tale of one of Georgia's forefathers, Sir Ernest Shackleton. Black sluice is a gorgeous, if harrowing, song about a stretch of water along a dangerous fenland road. The banjo, mandolin and guitar give perfect support to a lovely expressive vocal from Georgia, with some excellent band harmonies and a quite addictive rhythm. The lightness of touch of the musicians makes a lovely contrast with the darkness of the tale. On the traditional Katie Dear Aaren takes his only lead vocal and makes an excellent job of it, with perfect support from Georgia's beautiful harmonies and a lovely fiddle break. There is a a high lonesome sound on Whiskey kisses, a tremendous Georgia Shackleton original, with lovely fiddle, mandolin and guitar and excellent harmonies on a song that could as easily have its roots in the U.S as England. Finally, the trio's version of Little rabbitt is an excellent and in some ways spooky otherworldly reading of a trad song that also evokes a hoedown in an old lost 'holler!'
This really is a tremendous album that will enhance anyone's musical collection and whilst rooted in old English folk music has so much more in its makeup. Some may be put off by the 'folk music' reference but that is their loss. The playing is always top notch and Georgia's vocals are quite stunning on a recording that has a quite magical unique quality.