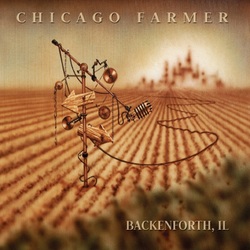 
It doesn’t take a genius to work out that Cody Diekhoff, or the Chicago Farmer, has been influenced by amongst others Woody Guthrie and John Prine. It also doesn’t take a genius to know that he has his own unique style that simply echoes his influences that are rooted in American folk music and stretch into alternative country and many
points in between. He is a hugely talented singer songwriter who deserves to be heard by more people and I’m sure when he is they will love his tremendous story songs that are full of intensity and passion, making them perhaps more believable than most other singer songwriters can ever hope to achieve. Certainly on this album he tells stories of ordinary people living small town American lives, telling of their struggles to find their place in the world, with some of the tales often easily related to the life of a hard working musician.
It doesn’t take long to work out that much of the subject matter as well as the name ‘Chicago Farmer’ comes from his own experiences, with him hailing originally from a small farming community and now living in Chicago. His tremendous story songs are more than well supported by his excellent vocals that are totally natural and lacking in any affectations, just projecting the story and the emotions contained within them. His guitar playing also goes a
long way past merely adequate on an album that is often as close to alt. country as it is ‘folk.’ This is his sixth recording and third that I’m familiar with and whilst the previous two were excellent I would have to say I prefer this current offering that in many ways has a conceptual feel but I will definitely be investigating his first three albums when I get the chance!
‘Backenforth, IL’ is co produced by Cody and Chris Harden and was recorded at the I.V. labs Studio in Chicago with Cody’s friends ‘The Hired Hands,’ Darren Garvey on percussion and Mike Davidov on bass, helping to keep the loose live vibe on each of the eight first rate songs on this disc. There were further additions later with pedal steel, resonator, electric and acoustic guitar, organ, dobro, and backing vocals to fill out the sound, although never to the detriment of the sparse feel and the powerful songs.
The album kicks off with the nice spacy sound of harmonica and guitar on the tremendous slow to mid tempo Everybody In This Town, a song that tells of the frustration of everyone knowing everybody else and their business in a small town, a song that is given a further lift by the addition of organ and melodic electric guitar. This is followed by the upbeat and light hearted Workin’On It, propelled by an excellent drum sound and gorgeous dobro with the addition of a sing-a-long chorus. The twenty Dollar Bill is a brilliantly conceived, written and performed story song full of an intense conviction and passion with just Cody’s vocal and acoustic guitar on the tale of a farmboy given a 20 dollar bill by his Grandma for emergencies and how it helped when he reached the city. A quite rivetting story with an excellent twist! The title track Backenforth, IL, is probably my favourite song on an album of favourites, with it’s incredibly catchy melody. It’s a story driven by his keening vocals, lovely tuneful guitar and plenty of twang and steel guitar, and intimates that  wherever you go you can’t shake off your roots. In many ways this song and to a degree, most of the others, is a real throwback to the experimentation that prevailed in the
‘traditional country music’ of the late 1940s and 1950s. The album really is that good.
The four remaining songs on the album are of the same incredible quality, one of them, Backseat,
appropriately being reminiscent of All the best a John Prine song from the early 1990s album ‘The Missing Years.’ A nice comparison to end an album review on and one that will certainly over time prove to be completely accurate. An album that I just can’t stop playing, by a hugely talented singer songwriter who wears his influences on his sleeve but still manages to imbue his tremendous songs with a lot of originality.