BUTCHERS BLIND - A PLACE IN AMERICA
​ 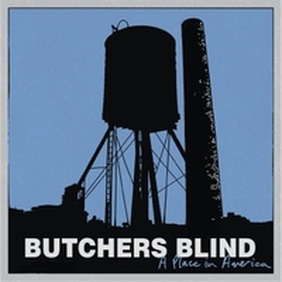 Recently I seem to have listened to several new albums on which the vocalists sound not too dissimilar to Don Henley. As I think I've said before I am not an Eagles fan but have always appreciated the quality of Henley's vocals, likewise Glen Frey's. Butchers Blind lead vocalist Pete Mancini has vocal pipes that are at least a match for those two but it gives me huge pleasure to say that this six song mini album/e.p has more appeal for me than anything the Eagles ever did.
Not that I'm trying to criticize the Eagles. A band that had their enormous success has to have had something pretty special. It's just that the songs on this recording have an epic quality that have, and this is what makes them special, that indefinable edge that the aforementioned never really had; instead choosing to smooth off any rough edges. Not that 'A place in America' has particularly rough edges; on the contrary it is a beautifully conceived and produced recording and one that should help this band leap frog most of their better known peers to the pinnacle of countryfied rock. I can't really call it country rock because it doesn't follow that classic genre although on these songs that often have a powerful rock dynamic there is a strong country element but none of the mellow blandness that besets many bands.
This excellent recording follows on from two high quality full albums. To my mind the songs on this album are actually better than their predecessors, with the bands direction seeming firmer than on the first two albums, that whilst excellent were more difficult to describe in generic terms and therefore more difficult to promote. This one will certainly be put under the alt. country or country rock umbrella, either of which will give an adequate but not definitive idea of what awaits the potential listener.
They don't try to overuse vocal harmonies but where they are used they must be the envy of most bands. In fact, this band, whilst there is often a wash of sound don't actually try to overuse anything, instead choosing to let their songs, the vocals and their playing win or lose the game for them. In this case the win is huge and the over production that many bands use to cover weaknesses is never there in the first place, cementing the quality of this talented four pieces music. The band consists of Pete Mancini on guitar and vocals, Paul Anthony, drums and vocals, Brian Reilly on bass and Christopher Smith plays piano. Pete writes all of the songs and sings lead vocals but the individuality and skill that each brings to the band ensures this is very much a 'band' rather than a vehicle for Pete. Everything is aimed at portraying these six excellent songs in the best light possible, something they achieve seemingly with ease, although arranging songs that not only have memorable melodies but are also often 'epic' in scope must be very far from easy.
All of the songs have an excellent dynamism and depth with some having a powerfully cinematic quality, often in much the same way as the 'Band.'  In the main they are stylistically different but they are able to create a world of density in every song, be it a near rocker or something that leans towards country balladry.  The title song, A Place In America gets under way with piano and a slow reflective vocal before the powerful lead guitar comes in with bass and percussion lifting the song to an epic piece of cinematic soundtrack. It is not necessarily the lyrics that bring the cinematic feel but the emotional vocal and the dynamic rising and falling of the music. With the piano and guitar sharing the lead on most of the songs the combination adds a little diversity to their sound. I never really felt that the piano worked well on music that has its roots in country but it certainly works brilliantly for this band. Ghosts is an easy going mid tempo country rock ballad that looks back at a former lover, with gorgeous melodic guitar and harmonies, whilst the bass and percussion enhance the sense of power and the dramatic reflections on a tale that has a lovely lightness of touch.
Just six songs that clock in at a little over twenty two minutes ensure that in my house the 'repeat' button is in constant use. The recording epitomizes the way that the modern day melodic blend of country rock and alt. country is going. In fact, had this been a full album it would certainly have been in my top ten so far this year.