THE WESTIES - SIX ON THE OUT
​ 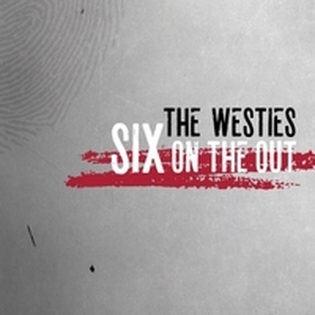 I have a new favourite singer songwriter and his name is Michael McDermott! Alright, that statement doesn't have the universal impact of the one proclaimed four decades ago (not by me) 'I've seen the future of rock 'n' roll and its name is Bruce Springsteen,' but it certainly does on me!
If ever an album was based on a writer's true life story it has to be this extraordinarily dark epic collection that are so incredibly descriptive that if any one of them was made into a movie it would no doubt have the effect of shocking many people. It's true to say Michael McDermott has led not only a chequered musical career but an equally 'chequered' life that fortunately for him and all roots music fans has culminated in him being helped back onto the straight and narrow by musical and life partner Heather Horton, eventually leading to the arrival of this often biographic album and its tremendous predecessor 'West Side Stories.' I have listened to many of his solo albums in the past as well as the two Westies recordings and all have repaid repeated listening sessions topped off in 2015 by 'West Side Stories' although even that incredible recording is put a little in the shade by this album that could ultimately prove to be career defining.
At times there are parallels with Bruce Springsteen, particularly the vocal style and tone, and in fact Michael McDermott's songwriting is certainly not flattered by the comparison either. Despite being poles apart in life experience both write about what they know but McDermott has often lived his life in the deep shadowy precincts of New York City whereas Springsteen grew up in the suburban area of New Jersey. Swap their roots and I can't imagine the reversal would come up with songs much different to what the two extravagantly gifted musicians have brought to the world so far.
This album was recorded and mixed by Lex Price, who also played upright and electric bass, Bouzouki, mandolin and acoustic guitar, in Nashville with the core band of Michael McDermott on vocals and acoustic guitar, Heather Horton on violin and vocals and Ian Fitchuk on drums, percussion and keyboards. They were helped out by another talented singer songwriter Will Kimbrough, who played, electric, washboard and acoustic guitars.
Michael McDermott has to be one of the most descriptive lyricists around and is not only a master of darkness but also of gorgeous melodies, with arrangements that balance the dark lyricism with the beauty of the melodies and harmonies. The scope of his writing has always been wide but on this incredible recording virtually every song has an epic, cinematic quality with a degree of realism rarely found in musical composition. What ties everything together is his voice, perfectly suited to these dark tales that are driven by often gorgeous melodies and perfectly arranged instrumentation, dark, melodic and utterly believable. Heathers lovely harmonies add more beauty to the mix, with that beauty on occasions deepening the darkness, in fact on one song, Like You Used To she takes lead vocal on a lovely sad haunting tale. Album opener If I Had A Gun is an incredibly dark and intense tale of murderous and suicidal intent wrapped up in a hugely dramatic story with Michaels expressive vocals having the ability to bring a melodic quality as well as a raw intensity to a song that has great beauty in the instrumental arrangement. Parolee is an absolute beauty of a dark 'country' song with Heathers beautiful harmonies, a powerful haunting' element and an instrumentation that includes melodic guitar and mandolin with the occasional intervention of steel guitar on a deeply dramatic tale. Next up is The Gang's All Here, a melodic reflective tale that could easily be a Celtic folk tale were it not for the lyrics that so obviously set the story in the urbanity of New York City. The lightness of the instrumentation is heightened by the chiming mandolin despite the story containing deep darkness and just a little light, in many ways depicting the harsh reality of life for some. Henry McCarty is a gorgeous slow moody ballad set in the old west telling the quite riveting outlaw tale of the demise of Billy the Kid. The arrangement is quite haunting, raising the dramatic tone of the story to an epic cinematic level with its detailed descriptive lyrics.  Once Upon A Time is an incredibly powerful song that reflects on a past that no one would wish for. The chugging percussive sound of the bass blends beautifully with hauntingly melodic guitars increasing the drama and adding this tale to the many epics contained on the disc! On the albums final song Sirens we are treated to a beautiful haunting steel guitar that on its own has a sad melancholic sound but when added to the heartrendingly sad lyrics it will be too much for some people despite being an incredible song of great beauty that you feel could be auto biographic but hope that it's fictitious.
The arrangements, vocals and melodies alone make this a tremendous recording that could hold great appeal for the 'masses' but when you add those extraordinarily descriptive and sometimes harrowing lyrics the album is lifted to the stratosphere where it has very little company. To me, after several dozen listening sessions, it has almost attained greatness, although it may very well be too open hearted for some people, although that will be their loss because the musicality alone should appeal to all music lovers. It is possible there may be other albums approaching this quality released this year, but I somehow doubt it.