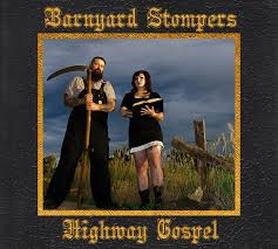 I know of no other duos in roots music that are able to call on as much power as this pair and yet they never seem to lose their incredibly strong country roots. In fact, in some ways they remind me of country’s equivalent to the mighty Reverend Peyton’s Big Damn Band! You get the impression that this music is rooted in the redneck world made familiar by the ‘Dukes of Hazard’, but not the sanitized television world, instead in the alternative universe of the Texas Chain Saw Massacre; such is the powerful, almost alien quality with which much of this often sinister album is imbued. It is all the more remarkable that only two people are making these powerful sounds. They are Casey Miller on guitars, banjo, harmonica and lead vocals and Megan Wise on drums, percussion, rhythm guitar and vocals. They are certainly not a novelty act but a duo with a dynamism that few if any can match, including the aforementioned Reverend!
This is their third full album and easily matches the quality of the previous two which were uniformly excellent, in fact ‘Outlaws with Chain saws’ was, unsurprisingly, given a rave review on this web site!
Because of the sheer raw power this pair are able to summon, seemingly at will, the album despite the aggression, violence and general mayhem is an incredibly rewarding listen, giving an insight into life on the ‘other side of the tracks’ for an aggressive ‘redneck!’ Certainly, it has to be assumed that this is storytelling, albeit of an unfathomably dark life style, almost but not quite to the point of caricature, and yet there is always the feeling that there could be a ring of truth to many of the elements they use, perhaps not straight from life but maybe based on real events in the world they live in or have lived in. Of course it could just be my imagination that wants to believe that the world they sing about really exists, but fortunately a safe distance from the world I inhabit!
Some of the subject matter probably wouldn’t enter most people’s nightmares but if any of these stories did, sleep would not be easy afterwards. Despite all of that darkness it is still an album that I keep returning to, knowing that the raw power and total commitment contained in the albums makeup is matched by few if any others and certainly no duos!
Moments of tenderness are difficult to find on this tremendous recording, in fact I’ve yet to find any! That is not to say everything is extreme aggression and violence; so many of the melodies are incredibly catchy and memorable and Casey is a tremendous vocalist who can show a little (very little) tenderness and a versatility that ranges from raw and harsh to classic country. It is a recording that would probably lose a lot of that fun element if there was much tenderness and fun is something that Casey and Megan seem to be having plenty of, despite being mired in the darkness that inhabits nearly every song!
Every song on the album is a highlight and picking out a few to mention is difficult, but here goes. Everybody Knows starts with a deep twanging guitar before Casey Millers powerful vocal comes in with Megan’s hard driving percussion forcing the pace on the tale of someone who knows there is no redemption for his sinning ways and doesn’t really care. This is followed by The Saw Is Family a powerful ‘real country’ song with a tremendous vocal from Casey and his excellent speedy twanging guitar that often has a deep surfing feel and an incredibly powerful solo allied to  Megan’s again hard driving percussion on the tale of the ‘redneck from hell.’ It is an incredibly dark tale that has more of a classic story telling vocal from Casey, enhancing its power with his matter of fact portrayal of a man for whom there will surely be no redemption. Devil Woman is another hard driving ‘redneck’ country song that has a powerful swampy bluesiness on a tale best described by the title but perhaps the ‘Devil Woman’ has pushed one man too far! The wailing harmonica, powerful percussion and dynamic guitar playing propel the song into truly spooky territory with Casey’s vocal having a distorted raw threatening quality. Mow You Down, as its title implies, is probably the most raw, aggressive song on the album. There is some excellent, speedy guitar playing with crashing percussion and Casey’s vocal so incredibly raw he is scary to listen to on the tale of a man who, to say crossing him is inadvisable, is an understatement of extreme proportions with even Megan getting in on the ‘harmonies!’ Choctaw Chuck, with its excellent percussion and chunky twanging guitar gives this song a distinctly threatening feel, until that is Casey comes in with his vocal, at which time the threat is upped several notches on this excellent song that changes tempo’s and has a smoky swampy feel with a guitar line redolent of old movie’s that have ‘cowboys and Indians’ as their subject matter!
It is so difficult to convince yourself that this is just two people, but they are two hugely talented and far to the left of centre people when it comes to country music; but country music it is and a hugely entertaining and rewarding version of it too. This is another excellent album to add to Barnyard Stompers catalogue and whilst some of their influences can be heard, this duo take ‘redneck country’ to its extremes ensuring they are pretty much unique and long may they remain so if they are going to keep turning out albums of this extreme quality!