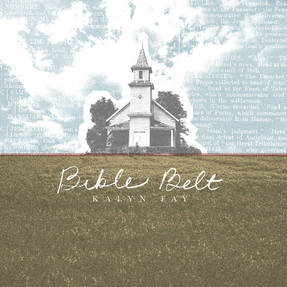 Kalyn Fay is another talented and highly individual addition to the long line of musicians who seem to be coming out of Oklahoma in recent times and as with many of the others, she too lives in Tulsa. Certainly most of the artists I am aware of from that area play music that is linked in varying degrees to country music as does Kalyn Fay and again as with most of the others, she brings a slightly different perspective to the genre. She is a lady who is blessed with an almost indecent amount of talent, being not only a hugely talented singer songwriter who has just released this, her debut album, but an equally talented graphic designer and a fine artist. (Check out her website!)
All of the songs were written by Kalyn and show a maturity and acceptance of whatever life has thrown at you and promises to throw in the future that I wouldn't have expected from a young singer songwriters debut album. It seems she is a lady who knows herself, has control of her expectations and accepts that some things are outside of our control, particularly other people. Much of the atmosphere of the album is created by the musicians who helped her out on this recording, all bringing an often unusual, but always original texture to the songs. Three in particular were Roger Ray on pedal steel, Cody Clinton, guitar and Kevin Warren-Smith on fiddle and all add hugely to this beautiful recording that ebbs and flows through a variety of emotions and haunting atmospheres. She has a beautifully feminine and expressive vocal style and whilst her songs run through a variety of emotions the two big constants throughout are the lovely memorable melodies and the gorgeous flowing soundscapes created by the instrumentation as it plays around with the melodies.
Album opener and title track Bible belt provides a strong hint on what is to follow with its beautiful flowing steel guitar and solid percussion supporting Kalyn's lovely feminine vocal on an edgy mid tempo country song that, as with many of the other songs on this album, has a misty, almost ethereal atmosphere on a quite personal story about still having an affinity with the area in which she grew up. Looking for a reason has chiming melodic electric guitars and haunting steel with the percussion and solid bass keeping everything grounded, allowing Kalyns flowing vocals and the steel guitar free rein on a song about indecision in a troubled relationship. That is followed by Oklahoma, driven by fiddle, percussion, bass and melodic guitar in support of kalyn's lovely breathy vocal on another excellent 'country song' and includes a lovely manipulative violin solo. There is an acoustic guitar intro on Middlegate Station that is soon joined by Kalyns expressive vocals and eventually the fiddle, bass, and beautiful melodic electric guitar on an absolutely gorgeous haunting story about her interaction with a teenage runaway that she met. Final mention goes to Plan a slow moody ballad that reflects on life's trials and tribulations, with fiddle and melodic chiming guitar flowing throughout the song.
This is a beautiful first album that will be difficult to emulate when Kalyn gets around to making 'that difficult second album' but with her abundance of talent she has a fair chance of doing so. What I doubt is that it will virtually define 'ethereal' as this recording does. Many albums that have an ethereal quality are more about the flowing sounds; what makes this so good is that whilst the sounds are important she has also written some excellent lyrical tales. Let's hope that Kalyn's music doesn't take a back seat to her career in graphics. That really would be a sad loss to music and all those fans who love gentle sounds and hard hitting stories in an original country music setting.