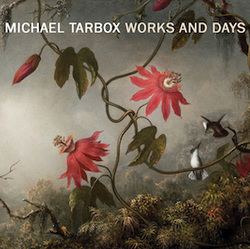 
This is Michael Tarbox’s second solo album following on from the two tremendous Tarbox Ramblers releases, 2000s ‘Tarbox Ramblers’ and 2004s ‘A fix back east,’both of them albums that still get played regularly in my house! In the case of this new album, as with 2009s ‘My Primive Joy,’ the quality is at least the equal of the band albums, something that is not always the case when a band leader decides to make a ‘solo’ recording. He is probably still easiest
described as a blues man, but as usual with music, nothing is ever quite that straight forward. Certainly there are blues songs on this excellent album but Michael seems to have used a broader canvas to paint these musical pictures, consequently showing more diversity but without ever losing his trademark raw, fiery and passionate lack of compromise in his music. Amongst all this he manages to conjure up several songs that can be described as ‘ballads’ but even these still retain that depth of feeling that is a dominant feature of every recording he has made.
The raw rasping vocals that he is able to vary to suit any situation dominate this album, with all of the songs having a barely suppressed underlying aggression even on the tenderest of ballads, almost as if the subject has a
natural fire that dominates but is able to suppress most of it entirely at will.
The instrumentation, which is never overdone, is always clearly defined and powerful, with assistance on this album from Zachariah Hickman on bass, John Sands, drums, Tom West organ and Dean Cassell also playing bass on some songs. Production comes courtesy of Chris Rival, who keeps everything sparse, allowing the songs plenty of space and giving Michaels tremendous guitar playing full rein. Whilst his vocals, as they should do, dominate the album, his excellent guitar playing and the distinctive sound, that always seems to me to engender a dark atmosphere, is never far behind. That darkness permeates the whole album even on the less dark tales, giving an at times slightly sinister feel that reflects the other side of pretty much everyday situations without actually being overt. A strange album that makes explanations difficult but with the songs always having an indefinable  undercurrent, not neccesarilly in the stories themselves, perhaps more in Michael Tarbox’s natural attitude, his raw but musical vocal and the sparse but powerful instrumentation.
Despite that dark feeling there are some tremendous melodies on these exceptionally well written all
original Michael Tarbox songs. The variety of tempos leaves little to be desired  on this album that ranges from slow moodiness, even a little tenderness, to mid tempo blues rock songs that unlike many with generic similarities are never overwhelmed by too much instrumentation. Each of the few instruments can be heard individually, a sure  sign of an excellent producer helping a hugely talented artist, both of whom know exactly what the objective is and should be delighted at having achieved that aim.
The album opens with the slow moody blues of I Believe In You, with it’s lovely chiming guitar supported in the background by the atmospheric sound of an organ. The tempo then rises to a hard driving mid tempo blues rocker in Hey Mr. Starlight, a song reminiscent of the Tarbox Ramblers, with no bluster, just straight forward bluesiness with clearly defined bass and drums supporting the clanging guitar and Michael Tarbox’s hard driving vocal. We move on then to a little tenderness but still with the same raw intensity on the gorgeous ballad Night Train To Chelsea, with the subtle support of bass and drums and Michaels guitar chiming beautifully. Capricorn
has a much brighter feel with it’s easy loping tempo and clanging guitar joined by some twang, whilst When The
Fire’s Out, with it’s beautifully played acoustic guitar being driven along by the thudding bass and Michael’s raw vocal again exhibiting a little tenderness but as a reflection of what might have been.
Further attemps at trying to describe this excellent album are pointless. Suffice to say that if you like raw
expressive vocals, blues rooted but varied songs and tremendous playing and production you should do yourself a favour and buy this album, in fact buy a couple of copies and give one to a friend! I’m sure they will still be your
friends after giving this song collection a listen.