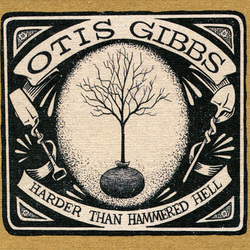 There is always something comforting about a new Otis Gibbs
album. Probably not something a singer songwriter of his calibre really wants to hear but the reason is that he seems to have the ability to put into words what many of us feel/have felt about our own frailties and life in general, without
ever being able to get to the crux of the matter as efficiently, poetically and in as few words as he manages. His usual subjects consist of tales of political and social issues, often with dashes of humour and excellent insight. This album rarely touches on politics, being probably the most reflective album of his career so far and whilst they can be classed as social issues, they are much more personal. Its almost as if he is looking back and assessing decisions he might have made or not made and advice he may have taken or not taken and musing over their possible effects.
There is a fuller band sound on this than on recent albums, despite the fact the songs don’t actually need too much extra colour, although none of the lyrical power is lost. There are some tremendous
players helping out on this album as well, including Thomm Jutz on guitars and backing vocals, Paul Griffith, drums and life partner Amy Lashley also supplies backing vocals.
All of the songs are written solely by Otis with the exception of Big Whiskers which he co-wrote with Adam Carroll. It is certainly the odd one out on this album, containing a comedic element as well as drama, on a song that tells the story of an old mans lifelong efforts to catch a giant catfish! It contains a walking bass line that Johnny Cash would have loved and is probably a story song that he would have appreciated in a similar way to his One Piece At A Time. Detroit steel is a paean to a car, ‘1,000 lbs of Detroit steel’ but the strongest songs on this excellent album are those that reflect on the difficulties of growing up and growing older and trying to achieve anything in life. Album opener Never Enough, can be summed up by its title that says no matter how much we have its never really enough. This is followed by Made to break, which reflects on not being quite as strong as others expect us to be, whilst Broke and Restless  bemoans the fact that life was simpler in the past before ambition and failure took charge. There is an excellent song about growing up and the difficulties that most of us have to come to terms with as we develop into individuals on Don’t Worry Kid and
another, Dear Misery that says despite being beaten down there will be no surrender! Most of these well written songs can be listened to as tales of an individuals reflections on a life but can also be taken as metaphors for the world with all its everyday issues that we all have to come to terms with.
This is yet another high quality folksy roots album in the Otis Gibbs collection of albums that never disappoint and always provoke some thoughts about the world we live in whether as an individual or the
bigger picture. Long may he continue to do so!