OVER THE MOON - MOONDANCER 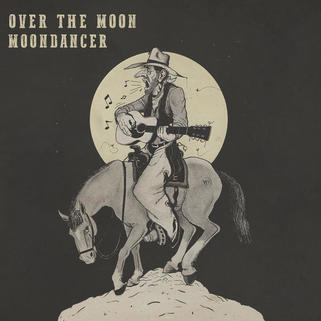 This is the debut album by a talented Canadian duo who have such a natural feel for rural music as perhaps we should expect from people who live on a farm in the foothills of Alberta's Rocky Mountains, in fact this album was recorded on that very same farm! The duo consists of the husband and wife team of award winning vocalists and multi-instrumentalists, Suzanne Levesque and Craig Bignell, although listeners can be forgiven for thinking they are siblings, such is the quality of their harmonies.
There is a lovely mix of styles on this excellent recording that ranges from high lonesome, western swing, old country, even an occasional bluesiness and much more besides all beautifully blended into a quite addictive debut album. Both Suzanne and Craig are blessed with vocal styles that possess great warmth and the ability to express myriad emotions and believability, be it in an Appalachian style or a hybrid western swing. Their voices blend as if they were born to sing together whether on their excellent self penned songs or those borrowed from others. Actually 'borrowed' sells them short because some of those songs are virtually made their own with their ability to stamp their own style on them.
If the purpose of this recording had been to put their own compositions up against some well known high quality writers to prove their own abilities, which it most definitely wasn't, their case would have been proven anyway! Of the ten songs five were written by the duo and the title song, Moondancer was actually given to them by close neighbour Ian Tyson, a man who has had a long career in rootsy country music and their version of the Rawlings/Welch composition By the mark is quite stunning.
The album opener is Ray Hughes excellent composition Strangers we meet, getting underway with a nice high lonesome banjo and guitar intro soon joined by the two beautifully blended and strong voices getting the album off to a flying start. It is an excellent exercise in sparse country music and the power two excellent voices have in evoking a story and a feeling much more efficiently than some of the over produced music that is currently prevalent in 'country music.' A haunting banjo and fiddle are soon joined by Suzanne's strong lead vocal on Turtle Mountain, a song that has a slightly eerie 'old timey' feel. There is a lovely flow to the song and a few changes that lift the performance never allowing the dramatic intensity to slacken. A lovely melodic jazzy guitar and fiddle are soon joined by Craig's excellent vocal on Over the moon, a stripped down western 'swinger.' It soon becomes apparent this is a duet with the couple exchanging verses and then coming together on the chorus and there are some lovely guitar and fiddle breaks on this song that could easily become a modern day stylistic template. Final mention is of the title track Moondancer led in by acoustic guitar, steel guitar and the accordion, soon joined by Suzanne's beautiful lead vocal with Craig coming in on harmonies. It is a song that has an old 'country and western' feel but with a strong 'high lonesome' element, with the instrumentation being just about perfect for the song. It's a beautifully mellow tale but one that has so much character there is no chance of it being labeled 'bland.'
There is a warm easy going style to every performance on this exceptional ten song recording; the sound always having a mellow feel but the excellence of the writing, the varied instrumentation mixes and the tremendous arrangements always bring more than enough to the recording to keep it interesting and entertaining, but when you add the lead and harmony vocals to the equation the whole album is lifted way above most of their peers!