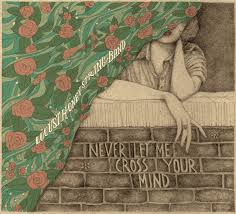 The two constants in this talented trio are Chloe Edmondstone on fiddle and vocals and Meredith Watson on guitar and vocals, with the new third member being the equally talented Hilary Hawke on banjo and vocals. Hilary is also a member of Dubl Handi another band that i’ve been raving about for what seems a long time. (as it probably does to those I have raved at!)

This is a heartrendingly beautiful album of new and old ‘old timey’ songs, with Chloe’s three originals blending perfectly with the traditional and known writer songs. The vocals are gorgeous as are the harmonies and the sparse instrumentation is all beautifully played, but what lifts the album to greater heights is that despite the beauty there is always an edge that keeps them miles away from the tweeness that besets many in the mainstream. Ultimately this trio have not only mastered the art of making music that can be challenging and engrossing with that powerful edginess, but at the same time it is stunningly beautiful. There is tremendous character in those lovely vocals as there is in the harmonies but what lifts the album way above most others working in a similar generic field is the overriding feeling that they are more interested in the spirit of the song than they are in perfection and it is that ‘real music’ quality that will guarantee multi million sales (in a perfect world!)

In a way this is a step up from their debut ‘He ain’t no good,’ because on that there was only one original song but really with the quality of the old songs or instrumentals they choose there can be no complaints. As with that previous offering, whilst they are rooted in ‘old timey’ they actually cover a much broader field of country music, selecting the songs that appeal to them rather than sticking to one decade. Certainly on this album there are some that are ancient traditional compositions, some from the 1920s, 1930s and a George Jones penned song from the 50s, so a very good cross section of country music, although that term is fairly limiting, when taking into account the variations in writing times. There are three excellent instrumentals, all of which evoke a hoedown in a ‘holler’ of old with the locals meeting up to let off steam in the church hall! This is something that can be applied to much of the album, most of which similarly evokes, if not a hoedown, then certainly sitting on a front porch in the mountains playing music. That is not to say this is a real throwback to or copy of the old music. On the contrary whilst it is easy to imagine those days long gone, these are three modern day young women who have absorbed enough recent influences to bring a beautiful modern feel as well, with that combination of evocations in some ways defining their talent.

Chloe’s album opener When The Whiskey’s Gone sets the scene with the gorgeous lead and harmony vocals, driven predominately by banjo and bass. That is followed by the Carter Family’s Righten That Wrong a slightly slower tempo with gorgeous dobro and fiddle adding to their lovely harmonies, all of which even at this early stage of the album will let new listeners know that this trio are something very special. On Chloe’s Horse Drawn Buggy we are treated to more lovely edgy lead and harmony vocals on a song dominated by the gorgeous dobro, giving the song a slightly different feel, creating an almost sinister, haunting atmosphere. Logan County Blues is a traditional instrumental, to my knowledge first recorded by Logan County’s own Frank Hutchison way back in the 1920s. This trio’s interpretation of it is if anything even more fiery with their hard driving style that includes fiddle, banjo, percussion and bass. Henry Lee is a quite gorgeous version of the classic traditional song made famous recently by Nick Cave. It has an incredible tempo change midway, with fiddle and banjo driving the song plus some lovely edgy, full of commitment vocals and harmonies. Finally, the traditional Four Cent Cotton is a gorgeous edgy hoedown that almost becomes an instrumental thanks to the hard driving and spectacular fiddle. It is a song/tune that almost shouldn’t be played anywhere other than a hoedown such is the atmosphere this hugely talented trio creates.

I’ve been fortunate indeed when considering that most modern string bands that I’ve heard range from very good to excellent. This is simply because most are true to the tradition whilst trying to bring something new or perhaps update ‘old timey’ music, although with varying degrees of success and depth. This trio don’t actually seem to be doing either. Their natural way of playing and singing has such a feeling of authenticity that if some scratches as well as crackle and pops were added, few would be able to tell the difference between their music and that created ninety odd years ago. There is no sense of ‘trying’ to copy or update the music; everything just has a completely natural flow. This album cements their quality following on from their excellent debut but unsurprisingly adds a little more thanks to the addition of fifty percent of Dubl Handi in Hilary Hawke. A truly stunning album that I will never tire of!