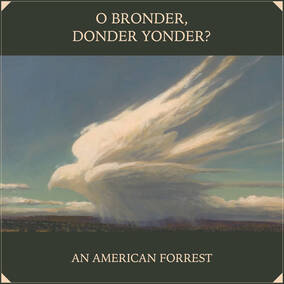 An American Forrest, (or Forrest Van Tuyl as some people know him!) apparently spends half the year working for a pack outfit transporting gear into the wilderness of Eastern Oregon. Hardly a way of earning a living that most of us can relate to, however much we love the picture our imagination conjures up, which probably goes some way to explaining how the songs he writes have such an affinity with rural life and a strong sense of individuality.
All eleven of the songs on this tremendous album were written by Forrest Van Tuyl and in the main ooze the rural life that he has adopted (and been adopted by) for around six months of the year and as an added bonus for me, and no doubt many others, both the songs and music are at the very least, vaguely reminiscent of artists of the quality of Robert Earl Keen and John Prine, whilst his vocal style is casual and has a rough edge that doesn't even try to attain a great range but is so much the better and more evocative in his depictions of life for it.
The album was recorded at Mike Coykendall's Blue Room with musical support coming from Barry Walker Jr. (Roselit Bone) on pedal steel, Mike Coykendall (She and Him, Sallie Ford) on bass, and several guest vocalists including the talents of the up and coming Maita, Jeremy Ferrara, and Matthew Zeltzer who all give excellent support. That support simply emphasizes the fact that everything on this album is a highlight, with the instrumentation always being well selected and nothing included simply for adornment. Equally the songs; they are beautifully written and performed by a vocalist 'tailor made' for these stories of life that never ramble on for too long (unlike some reviews!) and get their point across in much the same way as those of the great writers already mentioned. This is Forrest's third full length album, all being preceded by three e.p's. Whilst I haven't yet heard the e.p's the three albums are all of the highest quality, although if pushed I would say 'O bronder, donder, yonder' is the best yet, although you can safely purchase all three knowing you are getting something that is 'country music' without Nashville polish and with a strong rurality but without the old 'hillbilly' feel.
There is a steel guitar intro on album opener Sam's house, soon joined by Forrest's hugely evocative, warm, relaxed vocal with essential colouring added by restrained percussion and piano as the song rises and falls in emotional depictions, with the steel guitar eventually dominating and enhancing the power. Easy rolling steel and electric guitar introduce the listener to Rawhide, with gently shuffling percussion on a mid tempo love song that is broken up by a melodic steel and guitar interlude on an excellent story song that includes a strong edge of humour, even using a short quote from John Prine's debut album! Steel, bass and percussion provide the introduction to Ain't been tamed yet, joined by Forrest's excellent lead vocal and lovely harmonies for support on a song that is, at least vaguely, reminiscent of Guy Clark. The song gradually builds to a relaxed crescendo with the hardening of the instrumentation and addition of harmonica before gentle finishing. Drum and melodic electric guitar support Forrest's excellent vocal on Yonder mountain, a strong atmospheric rural tale. Eventually the percussion tightens up and latterly the melodic electric guitar allied to the percussion creates a lovely haunting, spacey atmosphere. Final mention is of Lady Godiva, the haunting steel guitar and dominant percussion somehow creating a feeling of the great outdoors on another excellent song. The harmonica comes in later in the song emphasizing the rural atmosphere as it dominates with steel guitar still there in the background
I suspect that this album will be included in the upper reaches of the year end lists of just about everyone who hears this tremendous recording. It certainly will be in mine. 'O bronder, donder, yonder' is an album made by a hugely talented man who brings a fresh and real perspective to modern day rural country music without ever straying too far from its roots and imbuing it with a powerful sense of originality.